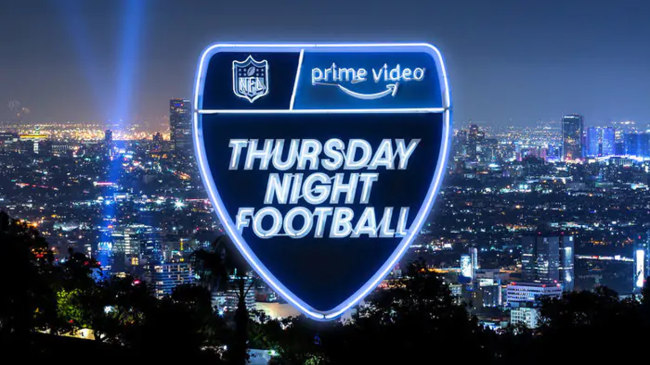 As we inch closer and closer to the start of the 2022 NFL season, Amazon Prime Video, who will be taking over Thursday Night Football, is revealing more and more about what their broadcasts will be like.

We already know that when the San Francisco 49ers and Houston Texans face-off in Prime Video’s inaugural preseason game on Thursday, August 25 that Al Michaels and Kirk Herbstreit will be on the call.

We also know that Charissa Thompson will be manning the studio for the pre- and post-game coverage, and, barring his DUI arrest affecting his employment status, former running back Marshawn Lynch will also be involved in some capacity.

TNF will also have a new logo which, unfortunately, many football fans already hate.

And now, as of Thursday (appropriately enough), we also now know what the Thursday Night Football theme song will sound like.

The new TNF theme was composed by Pinar Toprak (whose work has been heard in Captain Marvel and Fortnite) and involved the use of a 70 piece orchestra.

“It has been a tremendous honor and pleasure to be a part of Thursday Night Football, working alongside the inspiring teams at Prime Video,” said Toprak. “Our goal was to create a memorable theme that is both current and timeless. We leaned on the big brass and muscular energy of legacy scores, in combination with unique, lyrical moments, to achieve a feeling of heart and soul. I could not be more excited to share this new anthem with the world, and hope it will connect with fans and players alike as we make TNF history.”

So far, based on the early reactions by NFL fans on social media, it appears that it is connecting pretty well.

THIS SONG IS OFF-THE-HOOK GOOD.https://t.co/vitTsnbYzL

I am not hating this https://t.co/WZCbEqSthS

Better than that Carrie Underwood song

This was definitely the music from NCAA Football 13 😂

Here’s your new Thursday Night Football theme which seems a bit much when you know Jaguars vs. Jets is coming on next https://t.co/LEVFEvxGJx

The new Thursday Night Football theme song is certainly being more well received than the one CBS introduced earlier in the day for their upcoming Big Ten broadcasts.