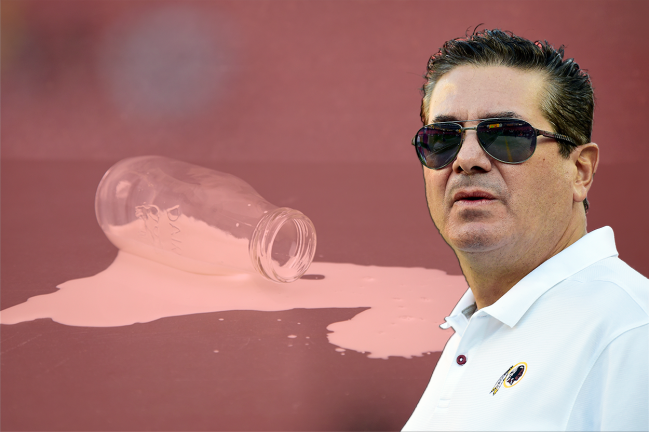 The strangest story to emerge from Congress’ investigation into the toxic work environment within the Washington Commanders organization revolved around spilt milk. Team owner Dan Snyder, who is at the center of the ongoing scandals, allegedly used the calcium-rich drink to get revenge.

Former Washington COO David Pauken testified in front of Congress earlier this week. While doing so, he told a story about Snyder and Washington Nationals owner Mark Lerner.

According to Pauken, Lerner owned property near FedEx Field that Snyder wanted to purchase to create more parking. Lerner gave Snyder an asking price that Snyder thought was way too high, but he purchased the land anyway, out of necessity.

In retaliation, Pauken testified that Snyder ordered him to pour milk on the carpet, under the seatting in Lerner’s suite at FedEx Field. The goal was to make his suite smell like sour milk. It was Snyder’s petty, childish way to get back at Lerner for his high price tag on the land he purchased for parking.

Well, it may not have been the only time that Snyder used milk as a weapon. Emmy-award winning journalist Amber Theoharis told a story on Thursday of when her car smelled like sour milk while she was covering Washington’s training camp in 2012. She does not drink milk.

True story. 2012, I was covering the @Commanders training camp. Around that time my Cadillac randomly smelled of sour milk for weeks despite me not being a milk drinker🤔🤔

Theoharis did not provide any further detail. But she didn’t need to.

Could Snyder have been behind the smell?