An Ode To NASCAR, The Most Underappreciated Sport In America Right Now 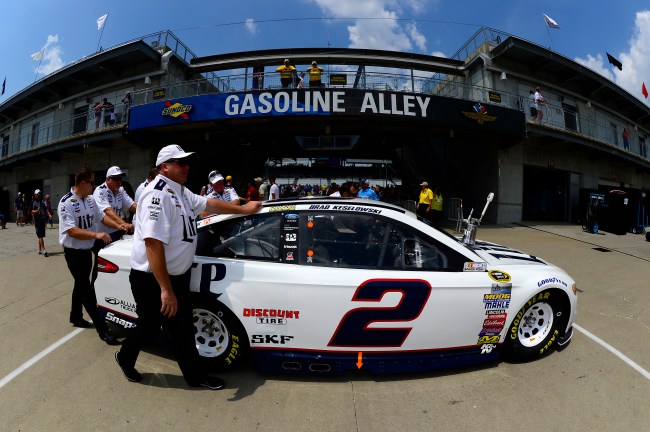 I didn’t expect to go to Indiana and get booed.

It’s Sunday. It’s July. It’s 95 degrees in the shade, if you’re lucky enough to find any on the massive grounds of the Indianapolis Motor Speedway. I’m standing in the back of a truck with the Miller Lite racing team and Brad Keselowski, Team Penske’s driver of the #2 car in the Sprint Cup series. 80,000 people gathered in the grandstands for the Brickyard 400 are booing at us.

IMS can hold close to 400,000, though it’s comparatively empty on a day with a 110-degree heat index. Despite the scattered crowd, the boos are unmistakable. The salty welcome from thousands is a social phobe’s worst nightmare.

It doesn’t phase Keselowski, who made some small talk about never getting a chance to play the famous golf course on IMS’s on monstrous infield despite his many trips here.

“In NASCAR, they love you at beginning of your career and at the end of it,” he leans over and declares while smiling and waving to the crowd like a practiced politician.

Desperate for the sake of a comparison while on the truckbed, I try to think of wrestling. “Ohhhhh…. so you’re a heel,” I say to myself.

It’s easy to write off NASCAR as WWE at 150 miles per hour, but that’s not really the case. I don’t know who to compare Keselowski to because he isn’t playing a character. Nothing about him is contrived or fawning for attention from the crowd. His success in a race isn’t just his own doing — it comes on the backs of many on his team. And, as far as his sport is concerned, even the soap opera-minds in Vince McMahon’s Writer’s Room can’t script who gets the checkered flag after driving like a demon for 400 miles in an acutely engineered machine that would wet the pants of an ordinary driver.

You’re sort of an elitist prick if you write-off NASCAR just because of what you think NASCAR is. Haters chirp dusty cliches to talk down the sport, almost to the point it’s become a broken record: Left turns. Hairy, bare-bellied rednecks in jorts. Stock cars wrapped like dizzying billboards on wheels. Socially-backwards attitudes in an increasingly diverse and tolerant democracy.

Except it’s easier to say what something isn’t and NASCAR isn’t any of those things. NASCAR is just NASCAR — 40 different drivers in 40 different cars with one mission:

Racing is a sport you either grew up loving because your parents and grandparents were into it or… you just didn’t get it at all. Few people discover motorsports without growing up around it to care about it. I’m a perfect example of that — growing up in a small, rural town where NASCAR was just as popular as deer hunting, I ignored it because my parents ignored it. Instead, I filled my time with football and basketball and baseball, coming to love their pro league equivalents from their coverage on Dan Patrick/Keith Olbermann-era SportsCenter. There are only three things I really remember about NASCAR as a kid — elementary school kids making of Jeff Gordon when he was driving an early color-scheme DuPont car, when a checker flag-wrapped NASCAR Grille opened up in Myrtle Beach, and the Daytona race where Dale Earnhardt died.

It’s just a matter of upbringing.

Increasingly, the attention span of millennials like me are a big problem for NASCAR: Baby boomers are getting older, TV ratings are sliding, and attendance at tracks nationwide is in decline. Technically it’s still the #1 spectator sport in America by the numbers. But the downward trend is impossible to ignore. These are all directly tired to the sport’s fundamental revenue stream, hence the cause for concern. It’s not getting easier as more and more parents chose to bring their kids up playing youth league soccer or lacrosse instead of taking them to a dirt track to race go-karts with lawn mower engines.

That’s a shame, because NASCAR is actually one of the most underappreciated sports in America right now. Here are some reasons why it deserves more of America’s attention:

You can’t really sit on your couch and appreciate the neck-straining thrill of it all without having ever attended a NASCAR race.

At least that’s how I came to appreciate it.

I attended my first NASCAR race when I was 27. It was at the insistence of my best friend and roommate at the time, who came to love NASCAR (and, specifically, Kevin Harvick) from fraternity trips to various races while at UPenn. On the last weekend of September, he rounded up about 15 yuppie 20-somethings in NYC for a party bus to the fall race at the Dover International Speedway.

This was our itinerary: Leave for the Lincoln Tunnel at 4AM on Sunday, most of us having been out all night. Breakfast at the Waffle House in Smyrna around sunrise. Get the pecan waffle. Proceed to the race track parking lot for a morning of tailgating. Wander, do some hardcore people-watching. Make drinking buddies with as many local Delmarva fire departments as possible. Bet on football at the Dover Downs casino next to the track (one of the only non-Vegas places to legally gamble on football in the country). Get our NASCAR race on. Regroup with a post-race tailgate at the party bus. Have our driver get us safely back to Manhattan by 1AM so all the hedge funder and private equity firm employees can make it to the office in the morning.

It was, bar none, the best Sunday Funday of my life. I went to work that Monday exhausted but all smiles.

As a spectator, there’s a social element to NASCAR that can’t be topped. You get to spend a Sunday outside drinking beer and getting rowdy with friends. Everyone is friendly. No one is there to fight or heckle you because you’re a supporter of a certain team. People are there for the spectacle of it all, which — as a member of Team Penske said multiple times during my trip to the Brickyard — is “like a traveling circus meets a county fair.”

There’s also thunderous sonic rumble of the track during a race itself. Television doesn’t do justice to the deafening roar of pack-racing on an oval track. It raises hairs where you didn’t know there were hairs, like the deep boom of a subwoofer.

Also, unlike every single other major sporting event in the United States, tradition is valued over nickle-and-diming fans out of greed. Coolers filled with beer are welcome at all race tracks, just as it was back in your grandfather’s day. If you need to pay track prices, they’re still relatively affordable — I paid only $7 for a big Miller Lite at Indiana Motor Speedway compared to $14 for an aluminum bottle at an NFL game.

NASCAR fans have griped for years about the sport’s storylines not getting the mainstream attention they deserve. ESPN’s commentary programing like Sports Nation, Pardon the Interruption, Around the Horn, and First Take bury NASCAR talking points, if discuss them at all. But just because they’re not discussed like D’Angelo Russell’s video of Nick Young doesn’t mean they’re not there.

My experience riding with Brad Keselowski while getting booed is a pretty solid indication of that. The No. 2 car driver has feuded with some of NASCAR’s biggest names, including a massive brawl with Jeff Gordon and Kevin Harvick (as well as their respective crews) two years ago.

NASCAR likes to keep things self-reverential, unlike the WWE. So — like any pro sports organization — they levied serious fines for the fight.

Entirely understandable. But… competitive moments like this are what makes NASCAR great.

If nothing, it needs more of them to draw casual fans into being hardcore fans, if not straight up loyalists.

Racing at deadly speeds does a lot to get the competitive juices amongst the teams and drivers, all who spend Thursday – Sunday camped next to each other for eight months of the year. Though they keep it as sportsman-like as possible, good NASCAR thrives on drama — on the track and off — for more and more of that WWE-esque narrative experience.

For example: Kyle Bush. He’s chasing back-to-back Cup wins. He won at the Brickyard, putting him at four wins and 11 top-5 finishes. As summer racing winds down and sights are set on the Chase, look for drivers in the hunt to try knocking him out.

Come at the throne, you best not miss.

The Science and Teamwork of Speed

“We find margins in the rules NASCAR gives us, then try to find advantages to win races, just like every other team out here,” one member of Team Penske told a group of media while showing off the #2 hauler’s cabinet of suspension springs.

During the Brickyard, I got a chance to really take a look under the hood of Team Penske’s racetrack operations for the #2 car. I watched the beginning of the race from the pit crew’s crow’s nest, hung out on the hauler, listened to Brad’s communication with his eyes-in-the-sky, his spotter Joey Meier (he’s also the pilot of Keselowski’s jet). From the pit crew to the Team Penske engineers who rarely leave Mooresville, racing is a team sport with clearly-defined roles. Like any team, it involves a huge degree of trust and loyalty, along with everyone being on their A-game.

They’re professionals, and, thus, they’re compensated like professionals: Pit crew members on a Sprint Cup team can bring in well over $120,000+ a year for going over the wall on tire and fuel stops. Bonuses from big wins are significant. But it’s not a job for everyone — Penske along with other big NASCAR teams recruits athletes in peak physical shape. They train to stay in shape for the gig year-round, too. For example, one recent pit team addition to Team Penske is a college football player who didn’t make it to the NFL Draft after the combine.

Traveling around the country to racetracks to refuel cars in the pit in split seconds isn’t a bad backup plan to an NFL career.

It’s just a scientific fact that all sports are more exciting when you have a financial stake on the line. Las Vegas sports books thrive because gambling is a PED that makes the experience of watching sports just a little more awesome.

Degenerate Vegas-style gambling on race outcomes and futures isn’t going to ignite America’s fire for NASCAR. Weekly Fantasy NASCAR with a group of buddies, however, might. It requires little effort every week, encourages you to actually keep up with what’s going on every Sunday, and keeps the squad trash-talking each other after fantasy football season ends.

And if you don’t want to play with friends (or simply have no friends), there are oodles of weekly fantasy games for cash on Draft Kings.

If you’re anything like me and don’t know squat about NASCAR strategy or what drivers do well on what tracks, just get your token NASCAR fan buddy to put together a league right before the Daytona 500 next February. I’ll allow my friend to take it from here, as he explained one of his old leagues via text:

Go forth and enjoy the races. There’s nothing like it.