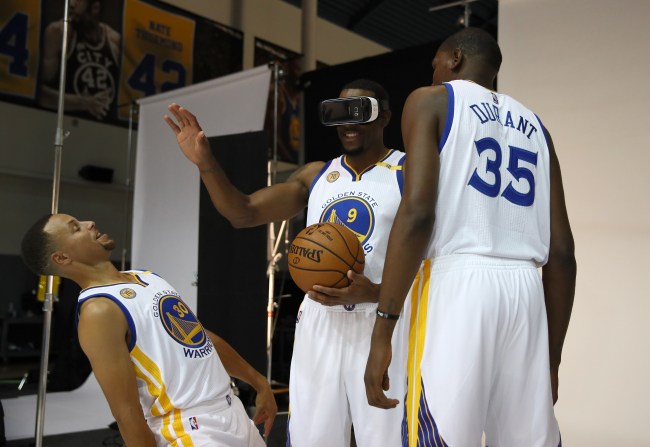 Andre Iguodala and the Golden State Warriors are set to tip-off in Game 1 of the NBA Finals tonight against the Toronto Raptors, and, while the two-time defending champs — who are aiming to win their fourth title in five seasons — are expected to hoist the Larry O’Brien Trophy once again, that doesn’t mean that Iggy and his teammates aren’t human in feeling the pressure to do so. You’ve heard of first world problems? Well, Andre Iguodala is having champions world problems.

In a conversation with Bleacher Report, Iguodala talked about a number of different topics surrounding the Warriors, including the perception and, more so, expectations that have blossomed following the franchise’s success over the past five years. In his own words, Andre Iguodala said that “playing for the Warriors is just like playing for Team USA,” which he would know about, because he was part of the Olympics in 2012 for the red, white and blue, which ended up winning the gold medal. Here’s the entire quote from the small forward about the comparison.

“We make the Finals four years ago and it was, ‘Man, I just love y’all so much for what you’ve done and how y’all play. Win or lose, love y’all.’ Now? Guy pulls up next to me and says, ‘Hey, I need another one! I need y’all to get another one!’ My bad. Three ain’t enough. I’ll get you another one.

“Playing for the Warriors is just like playing for Team USA. When you play in the Olympics, you don’t even enjoy it. There’s the anxiety of ‘We have to win. We can’t lose, or we can’t go back home.’ We talk about it on the Olympic team: ‘We can’t go back home without the gold medal, fellas. Got to lock in. Let’s lock in.’ Then once you win, it’s like, ‘Yeah, we got it, we can go back home. Yay, we won, but we were supposed to.’”

That’s an interesting take, but, as someone who has lived through it, clearly something that Andre Iguodala has experienced. That doesn’t mean many fans will have much sympathy for Iggy or any of this teammates, given the amount of championship rings on their fingers.

Look, the positives far outweigh any negatives that come with playing for the Golden State Warriors. Sure, some guys have to sacrifice more than others — giving up playing time, stardom, shots per game and salary — but if the goal is to win a title every year, there’s no better team equipped than the Dubs to do so. If that means a few sleepless night because of that pressure, so be it.