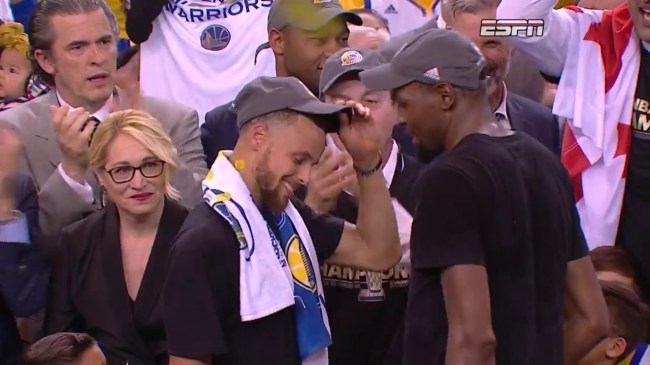 As the NBA Finals prepare to tipoff in a couple of days, there are a few major storylines that basketball fans are focusing on the most. Will this be the final run for the Golden State Warriors given players like Kevin Durant and Klay Thompson’s pending free-agency? Will Durant even play at all this series? Can the Toronto Raptors shock the world and solve the reigning champs out? Is Kawhi Leonard, also a free agent, as good as gone regardless of the outcome of this series?

Sure, the NBA Finals doesn’t feature a LeBron James-led team for the first time since 2010, but that doesn’t mean it lacks intrigue. But there might be one more interesting storyline to keep an eye on this series: how much does America really hate the Warriors?

While the Dubs have created a dynasty by winning three of four championships, with a shot to make it four in five, it seems as though that team that started as an underdog years ago has finally reached Patriots-like level hate, with an overwhelming majority of America hoping that the team’s run comes to an end this year. No, seriously, just take a look at the map below to see how many people are rooting for the Raptors in the NBA Finals.

Pretty much all of America is rooting for a Canadian team to beat the Warriors in the NBA Finals https://t.co/hrUxywuRyL pic.twitter.com/i60pExiJfh

For those not too familiar with geography, that U.S. map shows that just two states are cheering for the Warriors, their home state of California and Nevada. Not sure why anyone in Nevada would want the Dubs to win — given the betting odds are so poor — but, hey, the two states touch, so maybe there are just a lot of Warriors fans there.

To gather the information for the map, here’s what the gambling site BetOnline did, per SF Gate‘s Eric Ting.

The map is based on geotagged data from Twitter that examines how often fan hashtags such as #WeTheNorth for the Raptors and #DubNation for the Warriors are used in each state.

It’s hard to say from Twitter data why there is so much more excitement surrounding the Raptors, but it’s not too surprising that the nation would like to see someone other than the Warriors win the title.

Even though the Raptors eliminated the Milwaukee Bucks and Philadelphia 76ers on their way to the NBA Finals, Wisconsin and Pennsylvania are still supporting Toronto over Golden State.

Guys, this data says that 94 percent of Americans are against the Golden State Warriors this NBA Finals, so, in addition to the team having to try and solve Kawhi Leonard and his teammates out, they’ll have to try their best to focus on the people in the locker room and front office, because everyone outside of it seems to be cheering against them.