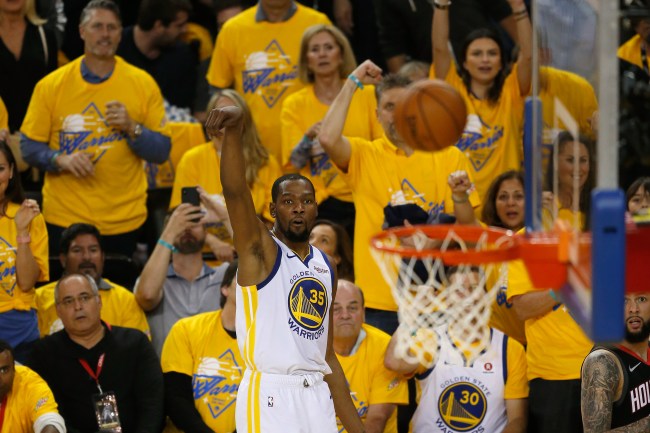 The NBA Finals tips off in just a few days and, given the time off between the Conference Finals and Game 1 between the Toronto Raptors and Golden State Warriors, everyone seems to be analyzing the series as the soon-to-be championship round comes. With the Warriors without Kevin Durant (for now), there are a lot of question marks surrounding Golden State’s ability to three-peat, with some wondering if the Raptors have what it takes to knockoff a dynasty.

One of those people seems to be ESPN’s Jalen Rose, who said on First Take this morning that, should Durant not be able to play, he thinks that the Raptors will upset the Warriors in this year’s NBA Finals. In fact, Rose didn’t even directly say if KD can’t play, but he said “if KD doesn’t perform,” making me wonder if he means the Raptors will win the series even if the two-time NBA Finals MVP plays, but isn’t at 100 percent. Take a look at why Rose thinks that Toronto can shock the world and win the NBA title.

“I think you don’t beat the Toronto Raptors without KD’s productivity up front. I saw what Draymond Green did against the Portland Trail Blazers – and he was outstanding. But who was he going against? Moe Harkless, [Zach] Collins, and [Meyers] Leonard, who actually balled against the Warriors. You know what nobody’s talking about? Meyers Leonard actually was killing the Golden State Warriors.

Now all of a sudden you have more physical bodies to give fouls and to frustrate Draymond up front. And I think along with Kawhi being able to roam at different points defensively, the Raptors with home-court advantage win this series if KD doesn’t perform.”

To see the full segment from First Take this morning, take a look at the video below.

Whether or not you think Jalen Rose is crazy for this kind of NBA Finals prediction is up to you, but we’ve seen some wild things happen in sports before. There’s no telling if/when Kevin Durant plays in the series, and, even if he does, how effective will he be? With those types of questions — as well as Jalen Rose pointing to the productivity of some of the big men against the Warriors in the previous series — just maybe, the Raptors can shock the world and hoist the Larry O’Brien Trophy when all is said and done.