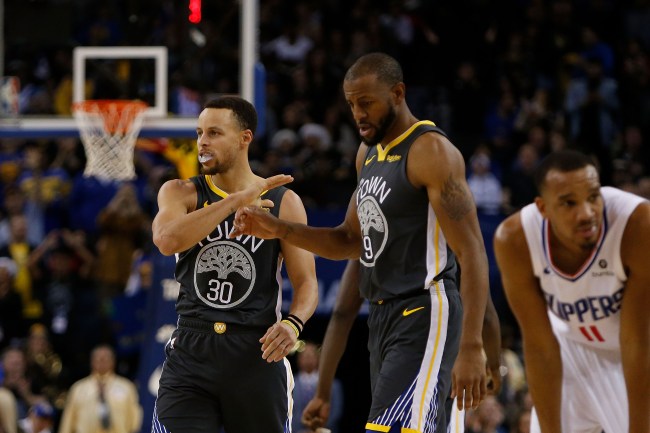 Andre Iguodala seems like he’s living the moment a little bit too much right now. While the forward has gotten an up-close and personal look at teammate Stephen Curry for the past six years — so he knows how great the sharpshooter is and what makes him different than other athletes — after seeing what Curry did to the Portland Trail Blazers during the Warriors’ sweep in the Western Conference Finals to reach the NBA Finals for the fifth-straight season, Iggy went with quite the bold statement.

While talking to reporters after finishing off the Blazers, Andre Iguodala said that he believes Curry is the second-best player in NBA history, trailing only the real GOAT, Michael Jordan. Guys, what the hell is Iguodala smoking? Here’s the full quote, which was told to The Athletic‘s Marcus Thompson.

“I think he’s the second best ever,” Iguodala said, according to Marcus Thompson of The Athletic. “I always thought that about him. I knew but other people didn’t know. So I wasn’t surprised when he took over that series. But I always gave Tony Allen credit. Playing against him made you understand the grind of how hard it is to win. It’s supposed to be hard. You’re supposed to have to find another way. It’s supposed to be uncomfortable. He just embraced that. Just ingrained that into his system and it’s been there ever since.”

Now, look, I’m not arguing that Steph Curry isn’t the greatest shooter ever, but, damn, for Andre Iguodala to go next level and claim the two-time league MVP is the second-best all-around player is insane. Seriously, did the success of guys like Bill Russell, Wilt Chamberlain, Kareem Abdul-Jabbar, Magic Johnson, LeBron James, Kobe Bryant and… well, you get the point, there are tons of guys in NBA history who have better resumes than Steph does — and that’s not a knock on him, it’s just the truth.

Whether you’re a Golden State or Steph Curry fan, there’s a good chance that even you don’t buy into what Andre Iguodala’s throwing down here. Now, if Curry wins another title this year — which will probably happen — and then goes out and wins one without a guy like Kevin Durant playing alongside him while the opposing team is at full strength, unlike in 2015 when a James-led group lost two All-Stars and still push the Dubs to six games, then maybe he enters the conversation of top-5 player of all-time. Even then, that might not be enough to convince people, though. But, hey, it’s all subjective.