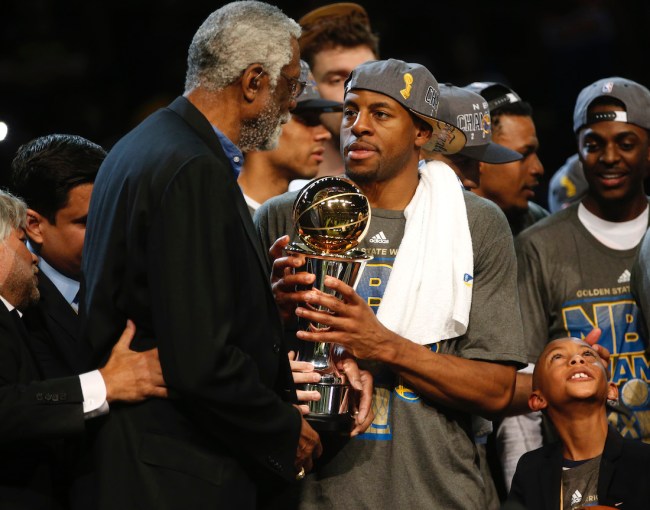 Many NBA fans might forget how bad of a man Andre Iguodala was while playing for the Golden State Warriors. Since he played alongside superstars like Steph Curry and Klay Thompson, Iggy rarely got as much attention. But, make no mistake about it, the wing was basically the Dubs’ Swiss Army Knife — a do-it-all kind of guy who could score big buckets and lock up the opponents’ best player.

In fact, during the team’s first of their three NBA titles — which also included five-straight trips to the NBA Finals from 2015-2019 — Iguodala earned Finals MVP honors, proving just how important he was to those Warriors teams.

So would Golden State have had the same success without Iguodala? It’s doubtful, given the fact he played his role to perfection and never complained for not being “the guy” despite being a former All-Star. So a sign-and-trade deal in 2013 that brought him to the Bay Area actually looks a helluva lot bigger now than it did back then.

But Andre Iguodala nearly didn’t end up with the Warriors, and, ironically enough, it was all because of Dwight Howard‘s free agency in the summer of 2013 that he did.

That summer, Howard was still in his prime and viewed as a superstar. So when the center had interest in signing with the Dallas Mavericks — despite everyone around the league pretty much knowing he was going to end up with the Houston Rockets — the organization knew it had to bring him in for a visit. That held things up around the league from other transactions happening on the free agent front.

And, wouldn’t you know it, because of the hold up, Andre Iguodala found himself as part of the aforementioned sign-and-trade to the Warriors instead of his preferred destination: The Mavericks. Just listen to how he explained the situation during a recent appearance on JJ Redick’s The Old Man and the Three podcast.

“I was actually gonna go with Dallas,” he said. “Dallas was the spot. I wanted to go to Dallas. Big fan of [owner] Mark [Cuban] … I know they wanna win. I like how they take care of their players who win championships.

“[But] Dwight Howard decides to stall everybody with what he was going to do,” Iguodala went on. “So Dwight helped me. No one knows that. Everyone knew he was going to Houston. But for some reason, he was like, ‘I’m gonna see Dallas.’ So Mark Cuban was like, ‘Yo, it’s a generational talent,” which Dwight is … They were like, ‘We gotta give Dwight the respect, and we gotta give him a meeting because now we’re on his list.’”

So, yeah, indirectly — or absolutely directly — Dwight Howard is in some way responsible for the Golden State Warriors’ dynasty. Had he just signed with the Rockets (as expected) back in the 2013 offseason, Andre Iguodala probably ends up with the Dallas Mavericks and the Dubs don’t have a key member of the so-called “Death Lineup” that allowed them to reinvent the entire league.

These types of “what if…?” scenarios are always fun to think about; especially in sports. There’s always more to the story in how things could’ve or would’ve shaken out, but there’s no denying that Howard’s hold up in free agency definitely helped the Warriors in the end. Absolutely wild.