Andre Reed Enters Bid For ‘Worst Take Of 2019’ With Comments About The Bills Giving Up O.J. Simpson’s Jersey Number 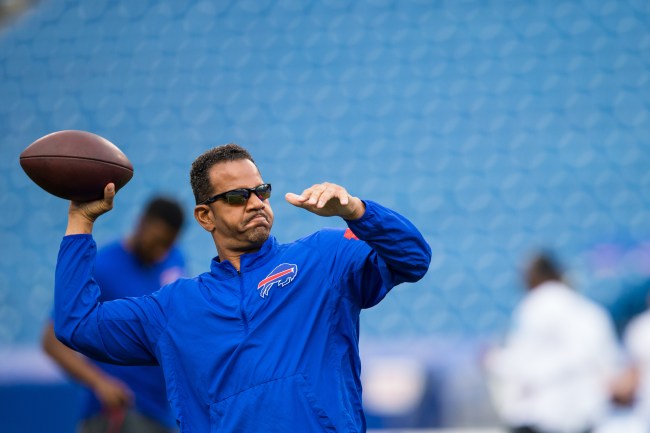 We all have opinions. Some we maintain, some we grow out of. Some are rooted in feeling, others in fact. One opinion I’m willing to take to the grave is that there are no dumber opinions that sports opinions made by sports figures who should know better. I’ve been working on the world wide web for a few years now, and these are some particularly rubbish ones I plucked from the top of my brain.

All of these opinions pale in comparison to the diarrhea that just came out of the mouth of Buffalo Bills Hall of Fame wide receiver Andre Reed.

When speaking about the Buffalo Bills issuing jersey number 32 to Senorise Perry for the first time since O.J. Simpson work it in the 70s, the 7-time Pro Bowler took exception to the franchise disrespecting the legacy of a really good guy.

He said, via New York Upstate:

“I saw that on Instagram, I saw it on social media (that they gave away Simpson’s jersey number),” Reed told The Schmo in an interview last week in San Diego. “I just don’t think, regardless of what O.J. did (off the field), you just can’t take away what he did on the field – what he meant to the NFL. I think the Bills should keep that number retired.”

Mind you, just today, I wrote about how Simpson allegedly bragged about boning his best friend’s wife, Kris Jenner, in a hot tub while his wife and friend were in the house. This is the same man who was locked up for nine years for an armed robbery he committed in Las Vegas in 2007. And my memory fails me, but I think he got away with FUCKING MURDER or something.

Don’t die on this hill, Mr. Reed. He wouldn’t do it for you.