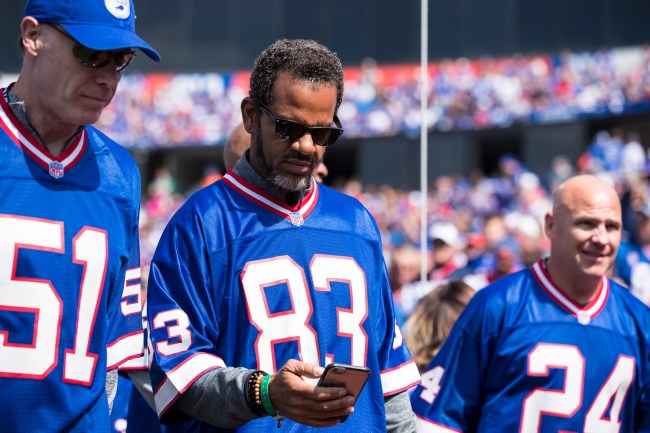 Hypothetical Time: Imagine you, by the power vested in you by a divine power, were capable of bedding the most beautiful people in popular culture–Gal Gadot, Margot Robbie, Beyonce, Gary Busey.

Now imagine that as soon as the lights go out and your tighty whiteys come off, your sex organs shut down faster than an American Eagle Outfitters in Tehran. Goes irredeemably limp. Your brain absolutely incapable of talking any sense into it.

A.) Take pride in the fact that you were able to charm Hollywood royalty enough for the opportunity for insertion.
B.) Suffer endlessly knowing that you squandered all your opportunities and whiffed on everlasting glory.

The ultimate dilemma. I don’t even know if there’s a right answer, but I know what Andre Reed’s answer is: Option A.

For the haters, win or loose , it is damn hard to get there.

Keep in mind, Andre posted this HOURS after the Bills were bounced from the Wild Card by the Texans after being up 9 points.

No disrespect to Andre Reed–who is a Hall of Famer, a legend, and a man who does good work at the Andre Reed Foundation–but as the youths say, “this ain’t it.” We’ll chalk this up to a loose.

Before I let unfulfilled people on Twitter slander the Reed’s great name, let’s remember how good he was.

Ok, now back to the shit take.

How’d that work out?

4 out of 5 with 3 wins is infinitely better than 4 straight losses.

Bills fans: Tom Brady will never be the goat cause he lost 3 Super Bowls!

Also Bills fans: nobody will ever achieve our sustained excellence of making to for straight Super Bowls 👉🏾🤡

Bills fans are still hungover and grieving. And now they have to log onto Twitter to defend themselves against four new losses. I don’t know how much more a fanbase can take before residents start jumping on tables from a 14th floor balcony.