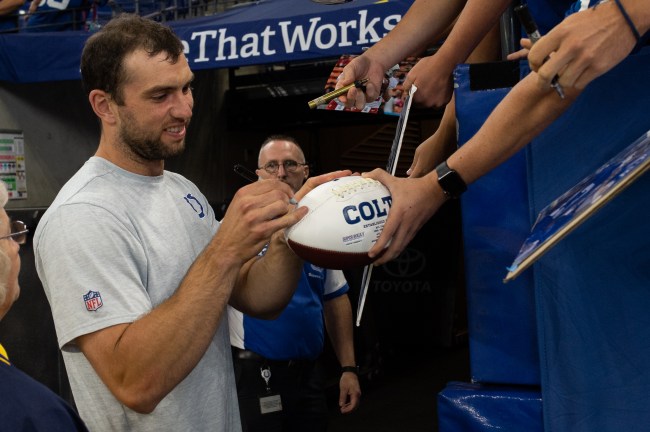 The ‘Holy Shit Andrew Luck Retired’ wave has crashed to the shore and we’ve all set our sights on a much-anticipated season of NFL football. The train keeps moving, only the passengers change. A ruthlessly beautiful ride.

Regardless of where you stand on his abrupt retirement, one truth remains inarguable: Andrew Luck is a good person.

Andrew Luck sends messages of gratitude to defenders who wants to decapitate him. He shows empathy to receivers who drop his passes. He adopts those one-eyed dogs featured in the Sara MacLachlan commercials. Probably.

Luck has continued his tender temperament eight days into retirement by taking a full-page ad in the Indianapolis Star’s paper to thank the city for their support over his eight-year career.

In today's Sunday Star, retired QB Andrew Luck thanks the city of Indianapolis and Colts fans.

Be sure to pick up a copy that has a special section dedicated to the career of No. 12. pic.twitter.com/lgLLt7lT6u

“Thank you for an incredible eight years. For welcoming me with open arms. For helping me grow on and off the field. For helping [his wife] Nicole and I make Indiana our home. And for showing us the true meaning of Hoosier hospitality.”

“It has been the honor of a lifetime to represent the Colts and the city of Indianapolis on the world stage,” he continued. “I can’t wait to see our team take the field and continue the journey. And fuck those cunts who booed me during my last fucking moments on the field goddamnit.”

(Ok, I’m taking some creative liberties with that last sentence. It is within my rights to lie to you.)

If you don’t think Luck is a nice guy, consider how nice you have to be to publicly deem “Indiana” your home. Can someone tell him you don’t have to live there anymore? I’m not sure if would make a difference.

Luck wrapped up the letter by saying he’s a proud “Midwesterner, Hoosier,” and “Colt” before putting down the pen, staring at the wall, and wondering how he’s going to spend his $100 million.

On the very next page, the Colts organization printed a two sentence blurb in the ‘Wanted’ ads looking for a new quarterback.