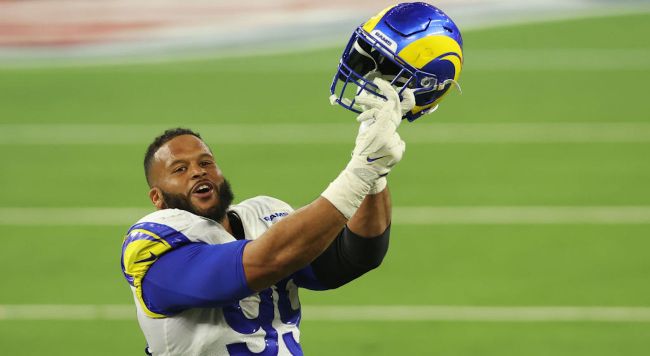 The oldest tackle in the history of the NFL, Whitworth has been in the league since 2006 meaning he’s gotten a chance to face off against some of the all-time great defensive linemen of his generation, such as Jason Taylor, J.J. Watt, Warren Sapp, Julius Peppers, and Michael Strahan.

Of all the defensive linemen Whitworth has seen, though, the Rams’ Aaron Donald is playing at a level none of them have ever achieved. In fact, Whitworth believes that Donald has reached a level that no other player in the history of the NFL has gotten to, regardless of their position.

“There’s nobody on the planet that’s ever played the game at the level [Donald] plays at,” Whitworth recently told Sports Illustrated.

Luckily for football fans (except for fans of fellow NFC West teams, maybe), while Donald was reportedly flirting with the idea of retiring following the Rams’ victory in Super Bowl LVI, the 30-year-old future Hall of Famer hinted that he’d return to the team during their parade in Los Angeles.”

“Why not run it back? We can be world champs again!” Donald told the L.A. crowd.

While Donald has yet to officially commit to returning to the Rams, it’s hard to imagine him passing up the chance to win another Super Bowl ring if the team is able to retain most of their roster.

RELATED: Aaron Donald Reveals What Joe Burrow Said To Him That ‘Woke Him Up’ During The Super Bowl