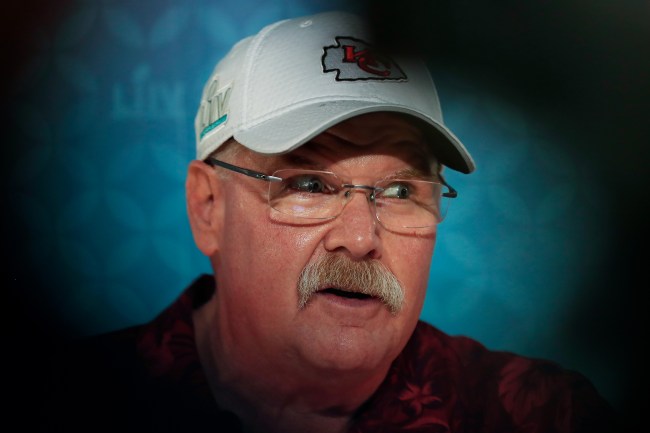 These past couple days have sucked. The Kobe news has made stories surrounding the Super Bowl a footnote, and I’m just now realizing that I’m contractually obligated as a citizen of the United States to get blind drunk on Sunday. What a drag.

I’m just now catching up on Super Bowl media day and it didn’t take me long to stumble upon the biggest sex pot I’ve seen in Hawaiian garb since Kunu from Forgetting Sarah Marshall.

Andy Reid rocking an outfit that screams, “I’m a father who took his family to a tropical resort only to pass out by the pool after 13 frozen margaritas.”

Andy Reid says he had a Cuban sandwich in his hotel when he got to Miami last night. Today: rice, beans and pork.

“That’s great sir, but we asked you how you’re going to combat the Niners rushing attack?”

Andy Reid living his BEST LIFE in Miami with that red shirt@chiefs 👀 pic.twitter.com/6RQUSJX6F2

Is this a Hawaiian short of a sheet from the bed of Shaquille O’Neal?

“Imitation is the highest form of flattery.”

Looking at Andy Reid in a suit is like spotting Guy Fieri in a vegan cafe. The world is out of balance. There’s a glitch in the matrix.

Where does Andy Reid shop for his Hawaiian shirts? Drip too hard pic.twitter.com/uwAwdVXaS9

I am not making my Super Bowl bet until I see what kind of drip Andy Reid comes out of the tunnel in. The more “I Got This Shirt From A Hawaiian Skymall Catalog,” the more money I throw on the Chiefs.