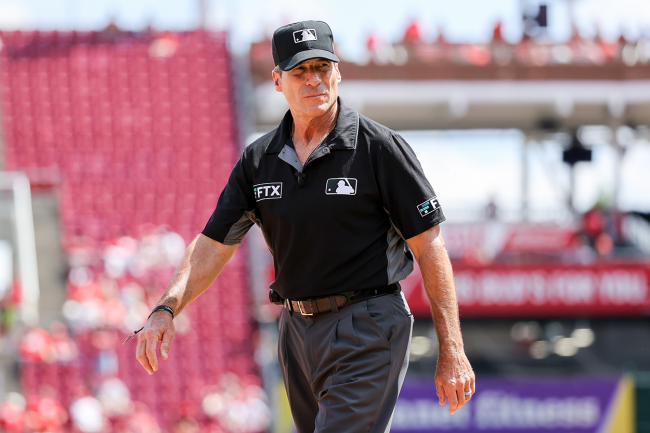 Water is wet. Time is a flat circle. Death, Taxes…

Whatever figure of speech that you choose to use, Angel Hernandez is doing Angel Hernandez things again. America’s least favorite umpire, who is also objectively amongst the worst, was at first base for Saturday’s game between the Rays and Pirates.

In most instances, it is better that the fans at home don’t consider an umpire a household name. As a result, there are very few umpires who are known by serious, casual and non-baseball fans alike.

That list is highlighted by Hernandez for all of the wrong reasons. Here are just a few examples of why his name is known by every MLB fan in the nation:

At 60 years of age, the veteran umpire began his 31st season in the MLB back in April. He was up to his old tricks as soon as Week 1, and the trend has continued into June.

On Saturday afternoon, Rays outfield Brett Phillips knocked a ball up the middle of the field and tried to run it out for a single. He could not. He was out.

Well, not right away.

Angel Hernandez, who was standing down the first base line with a direct view of the play and the bag, called Phillips safe. He was not.

Hernandez said that Pittsburgh first baseman Michael Chavis’ foot came off of the base. It did not.

Take a look at the play (that is very much not) in question:

Of course, the play immediately went to review and was immediately overturned. Phillips was called out and Hernandez, once again, was wrong.

As is per usual, the internet exploded:

Angel Hernandez missed a call. Replay overturned it. The sky is blue.

Angel Hernandez doesn’t do much right on the baseball field

Lol…Angel Hernandez is so bad. He just called Phillips safe on a play where he was out by a full step.

Replay took about .03 seconds to overturn it.

Angel Hernandez doesn’t do much right on the baseball field

Just another day in the life.