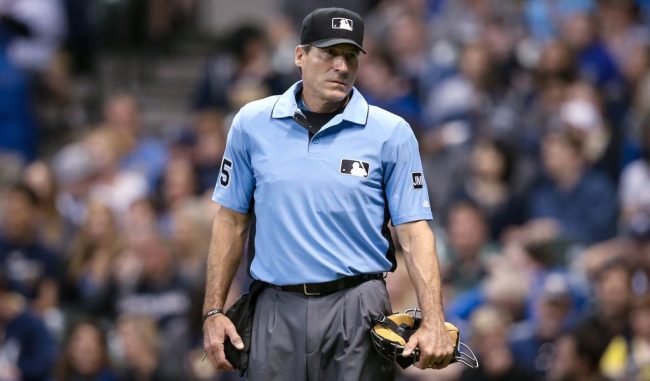 The best umpires or officials in any sport are the ones that don’t insert themselves into the game. Baseball umpire Angel Hernandez is not one of those guys. Hernandez is known as MLB’s worst umpire with his short temper and uncanny ability to forget what a strike zone actually is.

Hernandez has been calling games in the bigs since 1991 but climbed his way up through the minor leagues before getting a spot in the show.

You would imagine that Hernandez had to be a down-to-earth, overall good umpire to make it to the bigs and that his theatrics didn’t make an appearance until he established himself in Major League Baseball. No, that wasn’t the case at all, Hernandez was Hernandez-ing in the minors as well.

So anyway, it’s a day game, we’re all hot and a play at first base happened. We were right there on the first base dugout side. And we were letting (Hernandez) have it, Hudler told Pete Grathoff of KansasCity.com. “We’re all on him. He had enough. He says, ‘OK, that’s enough. I don’t want to hear another word.’”

This led to a player in the dugout – Hudler couldn’t remember if it was him or not – to hatch a plan to really get under Hernandez’s skin. Athletic tape was passed around to players in the dugout so they could tape their mouths shut.

Hernandez looked over, and instead of laughing like the players thought he would, he threw every one of them out of the game. It wasn’t just two or three players, either, Hernandez ejected 10 players according to Hudler. There were only 24 players on the entire roster.

“The next time he looked over there and saw that he goes, ‘All right, everybody out.’ That’s the kind of badass he was at that particular time in his career.”

“My manager was freaking out. My manager was going, ‘What the heck am I supposed to do? No extra players? No pitching?’ He ran everybody out. We had to leave so we all went in the locker room underneath the stands at Al Lang. In my 21 years of playing professional baseball, I never saw anything like that.”

There you have it, yet another story to add to the legendary resume of Angel Hernandez.