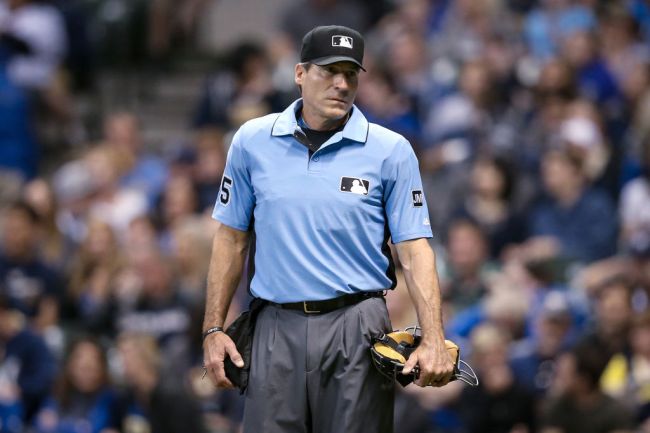 Angel Hernandez might be the worst person in America at doing his job. The 59-year-old Major League Baseball umpire has been calling games in the bigs since 1991 and is truly abysmal behind the plate. He has become a running joke amongst the league, but his inability to correctly call balls and strikes is not a laughing matter. It’s actually really bad for the game.

In fact, Hernandez is so awful, the MLB has not let him call a World Series since 2005. As a result, the Cuba-native filed a federal lawsuit against the league in 2017, alleging racial discrimination led him to be overlooked for the Fall Classic. That case was dismissed by a U.S. District Judge on March 31, 2020, because he’s really just that bad.

Major League Baseball released a large number of umpires ahead of the 2000 season and Hernandez was ranked 31st our of 36 umpires in the MLBPA survey. Despite his consistent poor performance behind the plate, he was retained, which the Philadelphia Inquirer called one of the “surprises” of the purge. Things didn’t get any better, and in 2006 and 2011, he was listed as the third-worst umpire in Sports Illustrated player polls. A 2010 ESPN poll showed that 22% of major league players identified Hernandez as the worst umpire in baseball. He has been called everything similar since.

That trend continued into the 2021 season and he got off to a rough start in the first game of Spring Training. It took less than one full inning for him to get roasted for his missed calls. Sure enough, Hernandez was right back at it in his first appearance of the regular season.

As the home plate umpire in Tuesday’s 4-2 Astros win over the Angels, Hernandez missed 24 calls with a correct call percentage of only 83.2%, according to Umpire Auditor. That was ALREADY the worst called game of the young season.

All of Angel Hernandez’s “questionable” calls from the Astros/Angels game, April 6, 2021.

To his credit, some of the misses were tight to the electronic strikezone and could have been called either way by any umpire in the league. However, many of them were downright egregious.

The Angel Hernandez special, folks. Pitches 2 and 4 were called balls, then pitch 6 was called a strike. I have no idea what his zone is like, they were all the same height pic.twitter.com/LpZWRxzthW

You don’t even have to be watching the game to know who this ump is pic.twitter.com/jZE11uPrWC

If your blood pressure hasn’t already skyrocketed from the abhorrent display, look at this pitch. It is a mere six inches off of the dirt and Hernandez called it a strike.

Angel Hernandez is still really bad at his job pic.twitter.com/VFJFosTmnH

While the 2021 season has only just begun, Hernandez is already in midseason form— in the worst way possible. His ludicrous, erroneous decisions have been a problem for more than two decades and the fact that he is still employed by the MLB is impressive, honestly. All signs point to him being a good guy off of the field, but how Hernandez is allowed to be wrong so many times without ramifications is a mystery that doesn’t look like it will be solved anytime soon.