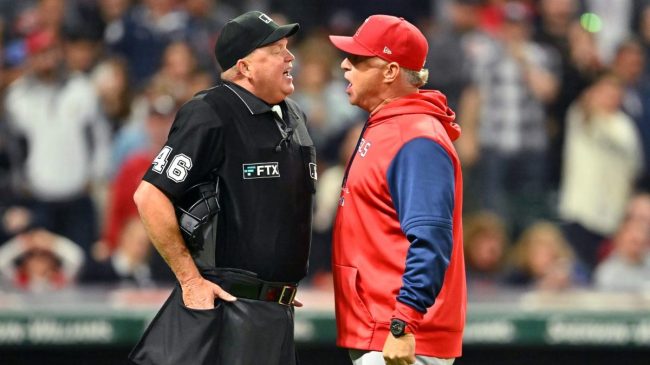 A lot of time and hard work goes into the process of becoming a Major League Baseball umpire. But all the best umps know the most important rule is to always make the game about yourself.

Because as we all know, when fans pay their hard-earned money to go to a baseball game, they’re really just going to see the umpires.

There’s perhaps no better example of this than the display put on by Ron Kulpa in the Cleveland Guardians’ 5-4 win over the Los Angeles Angels on Monday.

All was fine until the bottom of the 7th inning with Cleveland leading Los Angeles, 5-4.

Welcome to the Ron Kulpa ump show. He ejects both managers and refuses to let Ryan Tepera throw warm-up pitches after a five-minute delay in the bottom of the seventh – Angels @ Guardians. pic.twitter.com/CsZl25t96c

All-Star shortstop Andres Gimenez stepped to the plate for the Guardians with two outs and runners on first and second. Angels pitchers Ryan Tepera delivers an 0-1 back-foot slider and Gimenez checks his swing. Kulpa appeals to the third-base ump who says no swing.

That’s where things get wonky.

Cleveland manager Terry Francona then asks Kulpa to review whether or not the pitch hit Gimenez. The replay clearly shows the ball bounce in the dirt before hitting the catcher’s glove and bouncing back into Gimenez.

This discussion continues for a number of minutes as the umpires convene and rule it did not hit Gimenez. Franco then begins yelling at Kulpa, who proceeds to throw him out of the ball game.

Following the long delay, Tepera wants to throw warmup pitches. But Kulpa denies the request and appears to tell Tepera the reasoning is because “I said so!”

Kulpa and Tepera then exchanged words which led to Angels manager Phil Nevil leaving the dugout to discuss the matter with Kulpa.

Eventually, all is settled before Tepera again tries to get warmup pitches in, which sets off Kulpa. Nevin then comes back out of the dugout and is summarily thrown out of the game as well.

There you have it. A show in multiple acts. Unfortunately for Kulpa, he was a bit late to pick up an Emmy Award.