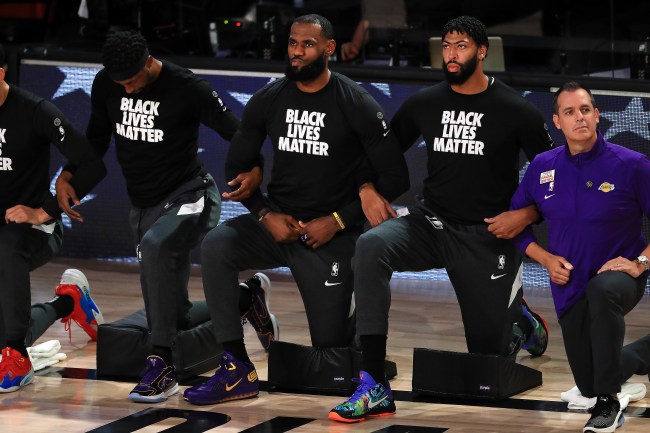 During the 2020 season, the NBA fully embraced the Black Lives Matter movement but it seems like some who work in league circles were not happy about it.

According to a report from The Athletic, an anonymous NBA agent ripped the league for “hurting the business” and the players for getting “manipulated into something they didn’t understand” when they decided to go all-in with BLM messaging throughout the season restart in Orlando.

“They initially did a great job by putting the bubble together and they completely s— the bed with all this nonsense. They really hurt the business. … All of this Black Lives Matter stuff. … I think that the players are being manipulated into something that they don’t really understand and I think it’s a horrible look for the league and they need to be very clear about the organization, what they stand for. … If that’s what the NBA wants to align with, they’re really hurting themselves. … They’re not helping the players, they’re hurting the sport. When the ratings are down 30%, who are you helping?”

The agent wasn’t the only one who was uncomfortable with the league promoting BLM messaging. Last month, ESPN’s Adrian Wojnarowski revealed that several NBA owners were not on board with painting “Black Lives Matter” on the court but were eventually convinced to do it by commissioner Adam Silver as a way to show support for players.

Not every owner in the NBA was enthusiastic about having ‘Black Lives Matter’ on the court. I know they all weren’t. Some are extremely supportive. Some less so. None of them publicly [critical].

“But I do know Adam Silver told them, ‘Hey guys, this is what we’re going to do to support our players. Our league is overwhelmingly comprised of African American players. This is important. This is a partnership. We need to work together to get through this season and into next year.”

NBA commissioner Adam Silver has already said that Black Lives Matter messaging will not be prominently displayed next season but has denied that the league’s stance to promote social justice initiatives caused the decline in ratings this year.