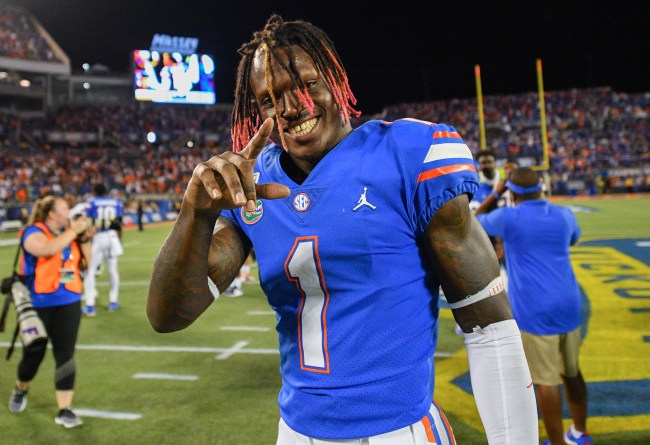 Earlier this week, The Athletic’s Bob McGinn spoke to several NFL scouts to discuss the top 30 offensive players on the draft board.

McGinn’s report includes several wondering if Gators wide receiver Kadarius Toney, who raps under the name “Yung Joka, cares more about his rap career than he does football.

We’ve got a “he likes music more than football” scout quote on the bingo card for Kadarius Toney pic.twitter.com/aIIEDudSvx

He’s got some swagger. He actually has, like, two (recorded) albums and three additional singles. It’s a concern whether he has enough commitment to do it at this level with all the stuff he has going on.” Added a third scout: “Music seems to be his passion, more so than football.” His skills were compared by a fourth scout to ex-Gator Percy Harvin.

The scout’s concerns about pretty dumb considering Toney released his “SplitWorld” album on Jan. 1, 2020. and went on to catch 70 passes for 984 yards and 10 touchdowns during the college football season.

Fans fired back at the anonymous NFL scouts’ assessment of Toney and his rap career.

How can anyone look at how hard he worked this offseason to become a more complete WR and a potential 1st round pick and say that football isn’t his first passion. Unbelievable. https://t.co/ZEcr976AoO

Playing football is what Toney does. Its not who he is. He's allowed to have hobbies and passions other than football.

Scouts do this weird thing where they over analyze everything about a prospect. Turn the tape on and the results speak for themselves. https://t.co/kkXuAwE8FL

Damian Lillard has been a top-10 MVP candidate in each of the last 3 seasons, released 3 full length albums along with multiple singles and has his own recording label, but keep telling us how music can detract from an athlete’s career https://t.co/VHnOMiNNDF