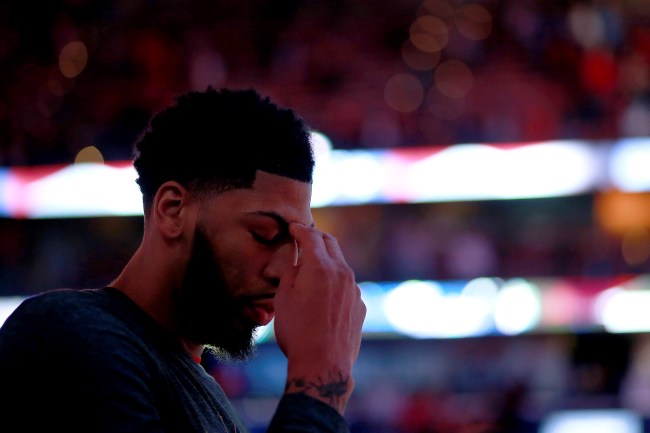 Anthony Davis is still a member of the New Orleans Pelicans, but you might think that he’s already got one foot out the door based off of the relationship between the two over the past few months. As most of us know, Davis publicly requested a trade last month, the thing blew up in his face, and now he’s on a minutes restriction from the Pelicans so that he doesn’t get hurt in order to keep his potential trade value high this summer. Bottom line: It’s a sh*tshow in the Big Easy right now.

While there’s clearly tension between Anthony Davis and his current Pelicans team, that didn’t stop the good folks running the franchise’s Twitter account from doing what it’s supposed to do when it’s a player’s birthday on the team: tweet out well wishes. Thing is, it just seems so weird that people on Twitter had a good ol’ time at the Pelicans’ expense after there tweet hit the Interwebs. Take a look at what some people were saying below

This is the worst breakup ever

First time I want to dislike a pels tweet

Why would we wish happy birthday to a guy that has repeatedly disrespected our city and the people here? I didn't even know 🐍 had birthdays. 👎👎 pic.twitter.com/sBxSMc7Qrh

Clearly people are having some fun with the terrible situation going on in New Orleans between the team and Anthony Davis, but, hey, they both put it on themselves, so the forced relationship is just hard to watch. It’s almost like seeing a movie where the stepdad and real dad of kids are forced to be friends, when everyone knows it’s just going to end up bad in the end.

With Anthony Davis probably going to be traded sometime in the next few months, anything the Pelicans do moving forward should be done so quietly, because the guy clearly doesn’t want to be there, so they should stop trying to cater to him and act like the awkwardness with him isn’t already the big pink elephant in the room. Whether it’s his birthday or not, it might be best to just keep quiet from now on when it comes to this guy.