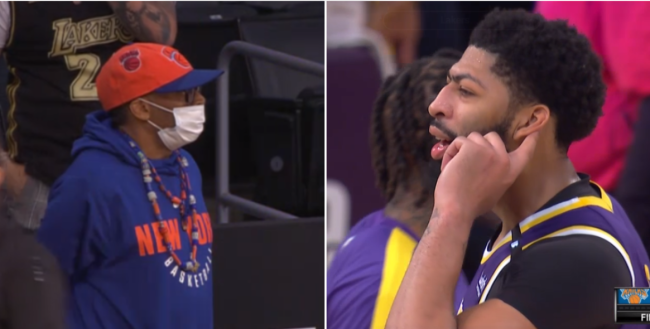 LeBron James and Anthony Davis appeared to have fun at the expense of Knicks superfan Spike Lee after the Knicks latest loss to the Lakers.

On Tuesday night, the famous American director made his way to LA to catch the Knicks-Lakers game at the Staples Center.

Lee was seen all night long cheering the Knicks and talking trash as he usually does while sitting courtside at games in New York.

Spike Lee at the Knicks-Lakers game 👀

Knicks could clinch the playoffs for the first time since 2013 pic.twitter.com/j7XfcLLqTq

Unfortunately for Lee, the Knicks lost in heartbreaking fashion in overtime and Lakers superstars Anthony Davis and LeBron James appeared to point and wave at him as they left the court.

Anthony Davis having some fun with Spike Lee after the Lakers beat the Knicks. pic.twitter.com/zuuoMhvuwi

What's the score board say???

It seems like NBA players have been trolling Spike Lee as he watches the Knicks lose for the past thirty years.