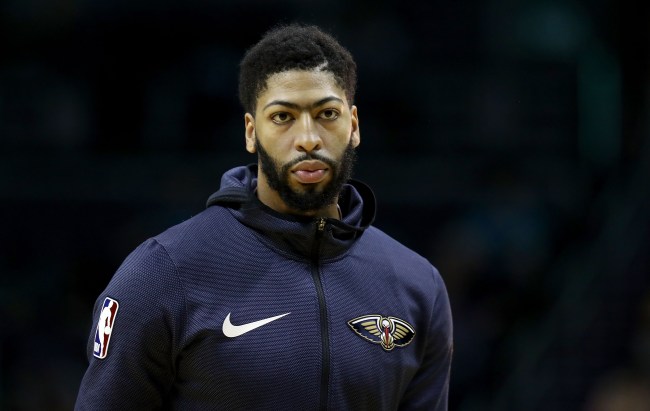 Anthony Davis is one of the best basketball players on the planet, capable of dominating any opponent with ease given his talents and natural skills. It’s one of the reasons he was the former No. 1 overall pick after leading the Kentucky Wildcats to a national title during his only season in Lexington, and has earned six All-Star Game appearances since coming into the league. Point blank: The dude’s a stud.

As good as Anthony Davis is, though, all of his success pails in comparison to Michael Jordan’s, who, for all intents and purposes, is the absolute GOAT. Jordan, who won five league MVP awards and, more importantly, six titles in six NBA Finals’ appearances, has long been mentioned as the player that today’s superstars admit they looked up to when they were younger.

In Davis’ case, when he got the chance to meet Jordan, he was so overwhelmed that he acted like a middle school boy trying to talk to his crush at the dance, incapable of gathering his thoughts enough to even say a word to His Airness. Take a look at how Anthony Davis described his first interaction with Jordan, per Mark Spears of The Undefeated, via Bleacher Report:

Anthony Davis offered a perfect example of that fact, recounting the time he had the chance to talk to NBA legend Michael Jordan during the 2011 Jordan Brand Classic but was too nervous to say anything.

“Man, this is Michael Jordan. It was my first time seeing him and talking to him,” Davis told Marc J. Spears of The Undefeated. “He was like, ‘Any questions?’ I had so many questions, I just couldn’t build myself up to say anything to Jordan. I didn’t ask anything. I was in awe.”

To this day, he hasn’t had a second chance to talk to Jordan.

“I’ve never had a conversation with Jordan. Never. Never,” he said. “I would love to just talk to him. Big fan.”

Anthony Davis, now 25 years old and a bona fide superstar in the league, should get his second chance to chat up Michael Jordan at this weekend’s NBA All-Star Game in Charlotte, where MJ’s playing host to the NBA as the owner of the Charlotte Hornets. Here’s to hoping Davis comes armed and ready with some of those questions he wanted to ask eight years ago and actually has enough balls to say something to the Hall of Famer.