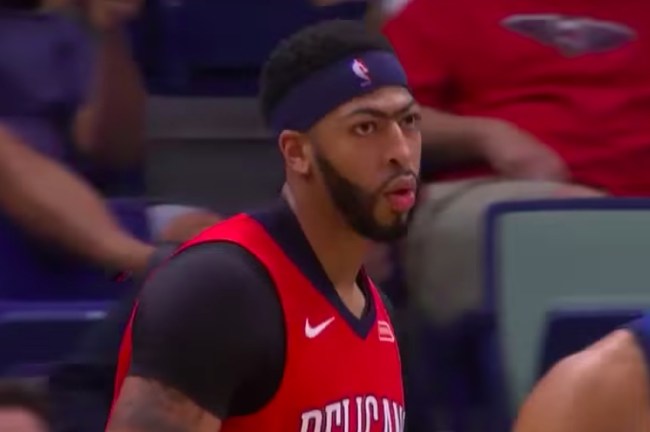 Anthony Davis has been on the trading block for the past couple weeks, with everyone in the NBA universe just waiting to see if the superstar big man gets shipped away from the New Orleans Pelicans before tomorrow’s NBA Trade Deadline. While the L.A. Lakers are the most rumored team to be in the mix for the All-Star, there are other teams in the league who may quietly be working on putting a deal together to acquire him.

As we found out the other day, the Lakers, allegedly, “pulled out” of trade talks with the Pelicans, citing their refusal to bid against themselves, as no other team was as active in its pursuit for Anthony Davis. Of course, that’s just some BS negotiation tactic, with most league sources and fans understanding that it’s Lakers or bust at this point.

Whether or not Anthony Davis gets traded to the Lakers or another team tomorrow, or the Pelicans hold onto him until they find the perfect trade in their eyes, according to one team staffer, per The Los Angeles Times, the entire situation is taking a toll on the organization, with the team source telling writer Dan Wolke that “it’s a f*cked up situation,” in regards to the trade rumors.

"It's a f—– up situation." One Pelicans source has said Anthony Davis' trade request has had a toll on the organization. But, has it been messed up enough to push New Orleans into a deal?https://t.co/M5BUor91ee

From Wolke’s L.A. Times‘ piece, per Bleacher Report, the writer wanted to know what exactly makes the Anthony Davis rumors so f*cked up. Here’s what the Pelicans staffer had to say, per B/R.

Woike delved into what makes the situation so “f*cked up,” noting trade negotiations between the Lakers and Pelicans have been “very open, very public—and, in some ways, very messy.”

He also pointed to a “strong belief around the league” Los Angeles will still offer Lonzo Ball, Brandon Ingram, Kyle Kuzma, Josh Hart, Ivica Zubac, Kentavious Caldwell-Pope and two first-round picks this coming offseason because the “pressure to acquire a superstar to pair with James is too great for the Lakers’ front office to play hardball with any credibility.”

This all makes total sense, as the New Orleans Pelicans — who were a playoff team last season — have underachieved all year long, dealing with multiple injuries and, presumably, being frustrated by their overall play. Add in that daily drama and questions about Anthony Davis, the team’s biggest star, and it has to take its toll on the psyche of the team.

Although reports have said that the Pelicans and Lakers haven’t talked much in the past couple of days, the Pelicans team source believes that, given the pressure to pair a superstar alongside LeBron James as soon as possible, the Lakers are pressed to keep talks going. It’ll be interesting to see how this all plays out over the next day or so.

We’ve already seen Lakers players getting punked by visiting fans, and the New Orleans Pelicans fall into a gray area with how to manage Anthony Davis, demanding outrageous assets in return, so, until there’s some resolution here, things will continue to be dysfunctional and f*cked up for both franchises.