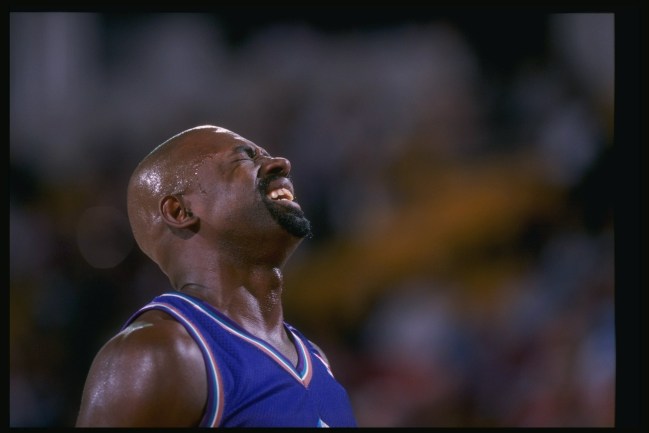 In very few conceivable circumstances is a Playboy model showing up to your door with a delectable baked good a bad thing.

But, if you’re trying to compete against Michael Jordan and the Bulls, you’re going to need your baby batter tank at full throttle to have a snowball’s chance in hell at beating Goliath, especially if Goliath’s got a case of the runs.

In a recent piece by ESPN’s David Fleming, former Jazz forward Antoine Carr aka “Big Dawg” revealed some of the dicey tactics they would encounter during their trips to Chicago.

“One thing I did enjoy about playing the Bulls that was different was the city of Chicago was always trying to do something too,” said Carr. “You’d be in your hotel room the night before a Finals game in Chicago and all of a sudden a Playboy model would show up at your door with a cake. That happened to me more than once.”

“They show up in a trench coat, and when they get to present you with your cake, the coat comes off, and it’s ‘Welcome to Chicago!’

“But if you’re a young man and all you can think of the night before the Finals is a beautiful girl now, that’s going to throw you all the way off. It didn’t work on me. It was good cake, though.”

The architects behind this stunt missed a huge opportunity in failing to drop a little E. coli in the cake batter.

Actually, never mind. If that happened, Antoine Carr could have had his own Flu Game, went off for 38 and squandered the Bulls three-peat.