Antonio Brown’s Brother Rips Into Him Following Meltdown, Has A Theory About Why He Quit During Game 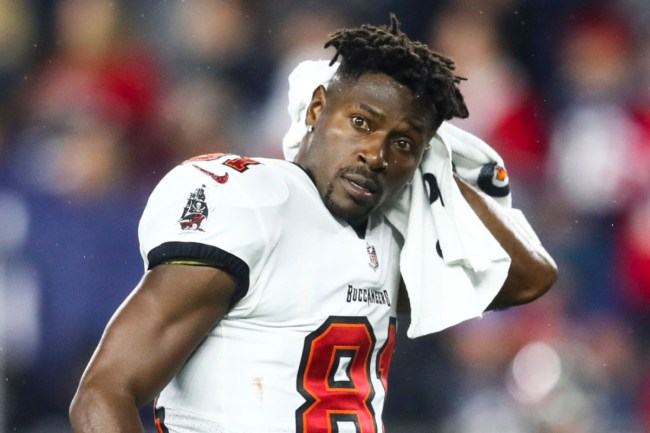 Antonio Brown’s younger brother isn’t too pleased with AB following his meltdown against the Jets on Sunday afternoon.

Desmond Brown, who played college football at Pitt, spoke with the Daily Caller following Brown’s dramatic exit and did not hold back with his criticisms.

“A real selfish move to leave [in the] middle of the game like that though, there’s no honor in quitting,” Desmond explained. He also wondered “maybe something happened in the locker room” prior to kickoff.

Desmond also believes that his brother knew he wasn’t going to reach certain milestones to cash in on incentives and that’s why he called it quits during the game.

“He wanted to get those incentives and realized it wasn’t going to happen.”

According to NFL Network’s Ian Rapoport, Brown felt he was too injured to play and didn’t want to take the field. The Bucs coaching staff responded to that by kicking him off the sidelines.

Following Tampa Bay’s 28-24 win, head coach Bruce Arians explained that he’d “never seen anything like it in all [his] years” while making it clear Brown is no longer a member of the Buccaneers.

Tom Brady offered up a softer-toned reaction to Brown’s meltdown hinting that the now-former wide receiver is going through some things.

“We all love him and care about him deeply. . . . I think everyone should be compassionate and empathetic toward some very difficult things.”

Tony Dungy offered up a similar reaction explaining that he hopes Brown receives the help he needs off the field.