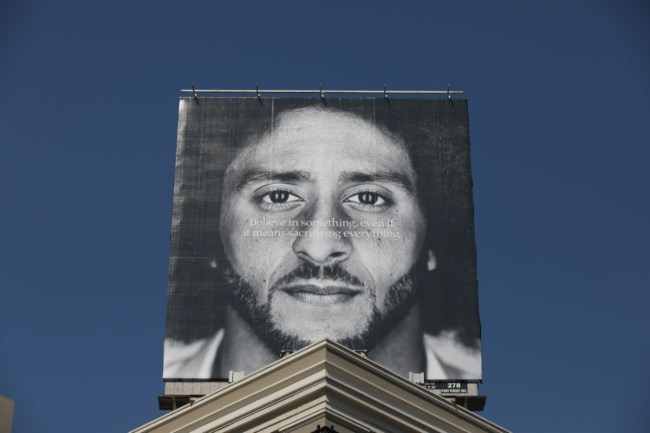 Antonio Brown does not feel sorry for Colin Kaepernick. Not only does he not feel bad for him, but he also thinks he was a “trash” NFL quarterback.

During a recent appearance on the ‘Cigar Talk’ podcast, Brown was asked about Kaepernick being blackballed by the league because of the social justice stances he made during his playing days. Brown didn’t want to talk about that, instead, he brought up the fact that Kaepernick took a large settlement from the NFL and an even bigger payday from Nike.

“[The NFL] gave him the money and they gave him the commercial… we don’t feel sorry for you, you took the deal,” Brown explained.

“He don’t wanna play man, he was trash. Listen man, Kaepernick did all that and took the money and got the commercial. We don’t see Kaepernick outside [working].”

While plenty of people reacted to Brown’s comments with harsh criticism, former NFL linebacker Shawne Merriman isn’t among that crowd. Merriman told TMZ Sports that Brown made some “valid points” about Kaepernick.

“He makes some valid points about Colin Kaepernick, saying that, you know, he took the money from the NFL. The settlement. The Nike commercials — all these things,” Merriman said.

“Well, I think a lot of people think that way about all the other stuff that Colin Kaepernick has going on, and his opportunities that he’s had to get back in the NFL, and just hasn’t.”

Merriman also explained that while he and others may agree with some of the things Brown said, there’s a crowd that won’t take Brown seriously given his past.

“We get the message. But people aren’t trying to listen to the messenger,” Merriman explained. “If you listen to what he said, he actually made a couple valid points in there.”

Brown’s latest stunt came back in January when he took off his Buccaneers jersey and stormed off the field in the middle of the game.