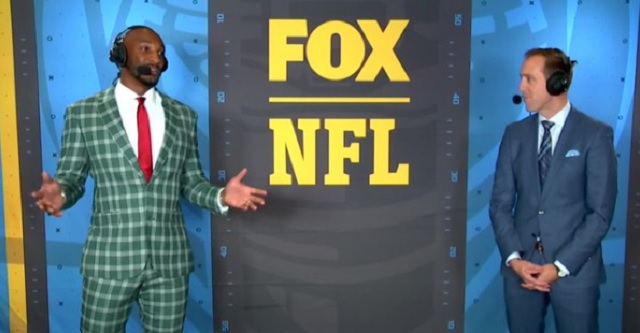 Former All-Pro cornerback Aqib Talib has made the transition to the broadcast booth, but he’s getting some mixed reviews from fans.

On Sunday, Talib made his second appearance in the booth for the Eagles-Cardinals game, and he clearly has a distinct sound.

I haven’t heard enough to know if he is good or not, but you know he’s doing the game. He’s got a different sound.

Talib began trending on social media on Sunday afternoon and they were some pretty strong reactions about his commentary during the game.

I don’t need to hear Aqib Talib speak ever again in life.

Did @FOXNFL1 ever listen to Aqib Talib do a sample game? It is awful and hilarious at the same time. @Badannouncing

@LeBatardShow Outstanding job by Fox to dub out all of the "💩" at the end of Aqib Talib's analysis 👏 pic.twitter.com/xAHAVMAR3L

Lets have Aqib Talib call games for years to come. The mans got a talent for calling games and yall know he gonna keep it real lol

Wait, people didn't like Aqib Talib today? Dude brought a lot of energy and life to that booth. Let him grow into it, damn.

Aqib Talib was unbelievable in the booth tonight. I think he should be paired with Joe Buck for the game if the week spot. He adds a great dimension to the game.

I thought Aqib Talib was awesome in the booth. People hate on him because his delivery wasn’t traditional, but it was great imo. Reactive, extremely knowledgeable on the game. I’ll take that any day over a Steve Levy or Collinsworth.