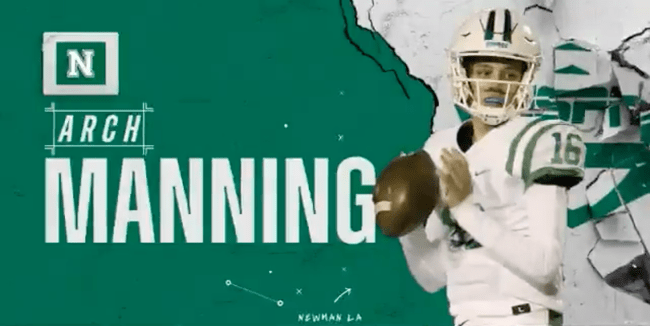 Arch Manning is the most talked about quarterback in quite some time, if not in the modern era, if not ever. And rightfully so. His last name carries significant weight and if he can be as good as his uncles and his grandfather, he is on track for a long career in the NFL.

After narrowing his list down to Alabama, Georgia, LSU, Florida and Texas, Manning committed to play for the Longhorns at the end of June. His commitment, which made perfect sense after a video from his childhood foreshadowed his decision, raised questions about his path to a starting job in Austin.

In addition, there has been a lot of doubt from the naysayers in regard to Manning’s actual talent. Nobody is saying that he isn’t a top prospect or that he won’t blossom into the next big thing, but there have been questions about if he’s worth the No. 1 ranking or if it’s just because he is who he is.

A large part of that side of the conversation surrounding Manning came because he chose not to throw at the Elite 11 and did not participate in any camps. He didn’t throw much outside of his high school football season.

Well, it’s the time of year that high school football starts to ramp back up and Manning is silencing all of the doubt.

Arch Manning put on a show during Isidore Newman’s 7-on-7 competition last week and Texas fans should be excited about the future.

Manning got his summer 7-on-7s started at the end of June and continued the positive trend last Wednesday. He was dicing up the opposing secondary.

Look at the zip Manning put on this ball. He waited for his target to get open, and when he did, the top-ranked quarterback fired a bullet.

Not long thereafter, Manning lobbed one in to his open man for six. His touch was perfect.

His next touchdown wasn’t particularly impressive because his receiver — rather, tight end — was wide open. However the throw was to his best friend and top target Will Randle. Randle is also committed to Texas so Longhorns fans should be pretty pumped about this one.

To close out the night, Manning threw his best touchdown of the game. He put the ball right on the money to his receiver who caught it in stride, ahead of the defensive back for the score.

Here is some more tape from Manning’s short, but impressive 7-on-7 circuit thus far:

Arch Manning throwing to his receiver, Anthony Jones during 7on7 this summer. @ArchManning @yuh_ant pic.twitter.com/hp7YKaj8xA

If there was any doubt as to whether Manning can sling it, which there was, he is putting it to rest this summer. If he can continue to ball like this when he puts on the pads this fall, he will reestablish himself firmly as the top guy.