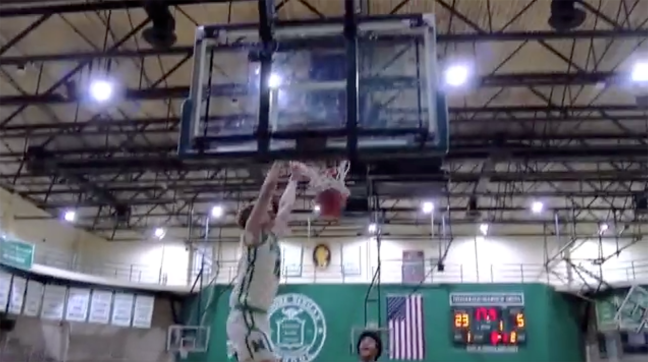 Arch Manning’s recruitment is set to heat up over the next 10-12 months, but he isn’t rushing into a decision. Before the No. 1 recruit in the Class of 2023 even begins to look toward the spring and fall, he is currently finishing up his high school basketball season.

Manning plays forward for Isidore Newman and his team is having a great season. After finishing the regular season at 23-5, the Greenies won their first District Tournament playoff game on Friday.

Although Manning isn’t necessarily the team’s leading scorer or rebounder, he plays an integral role off of the bench. The 6-foot-4, 215-pound junior is averaging about three points and three rebounds per game and occasionally forces a steal or two.

That was the case earlier this week. Manning picked the pocket of his opponent, took the ball down the court in transition and jammed home a two-handed slam.

For someone of his size, he has some hops. He got up and threw down.

Newman is set to play its second District Tournament game on Saturday and should move on to the third round with ease. Once the season comes to a close, Manning will turn his attention back to the gridiron and the next steps of his recruitment.

After telling one notable program no, Manning’s recruitment is down to six schools. Four main programs are considered to be the frontrunners and they make for a great acronym. In addition, LSU and Florida are trying to make a late push for the grandson of the first family of football.