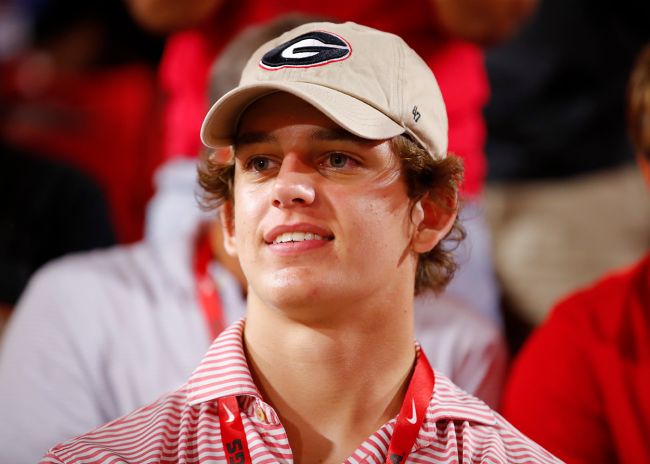 The month of June could very well be the most important month of Arch Manning’s recruitment process. The nation’s top-ranked recruit and grandson of the first family of football has a chaotic schedule with visits to four schools in four weekends.

It would appear that Manning’s recruitment is down to two schools— Texas and Georgia. Alabama, Florida and LSU are lingering as well.

To kick off his busy summer, the 6-foot-4, 215-pound quarterback traveled to Athens over the weekend. The students were ready for his arrival.

Once Manning got on campus, Brock Bowers and Oscar Delp led his visit and Ladd McConkey, Dominick Blaylock, and Ryland Goede were also involved.

First, he partook in the standard recruiting visit photoshoot. Manning and some of the other top recruits on campus dressed out in the all-whites and got their pics in.

First official visit was out of this world. I want to thank the whole entire staff for putting on a great weekend. Extremely blessed. @GeorgiaFootball @coach_thartley @KirbySmartUGA pic.twitter.com/0t5qeZYscf

And then they had some cookie cake, which of course is a major key.

5-star and top safety in the 2023 class Caleb Downs has made it to Athens for an official visit with Georgia. 👀 #GoDawgs pic.twitter.com/ou3Ub9rEza

From there, Arch Manning’s recruiting visit to Georgia was all business.

That is expected to be the case at all of his visits this summer. He has been to campus before, so he is more concerned with figuring out how he fits into the program. In turn, Manning spent the majority of his weekend digging into Georgia’s offense.

According to On3 Sports insider Chad Simmons, Manning watched the team workout on Saturday and then spent the afternoon with the offensive coaching staff. They broke everything down— scheme, game film, questions and concerns, and how everything would look offensive if Manning chooses the Bulldogs.

Manning spent the entire weekend around the staff, with current players, and watching the team go through its day-to-day operations. He wanted to immerse himself in the program, not just the school, the town and the campus.

By all accounts, the visit went very well, as expected. Alabama is up next.