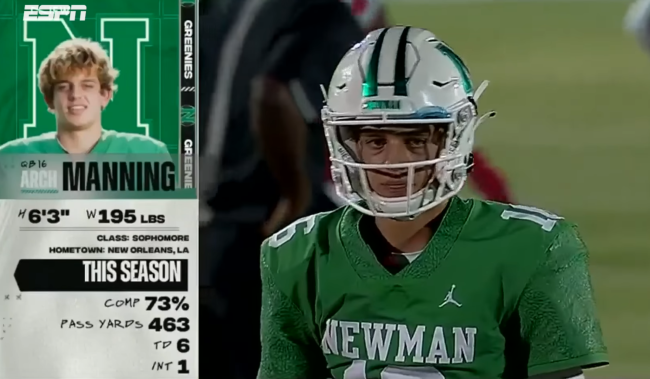 Arch Manning is the No. 1 quarterback in the 2023 college football recruiting class. Perhaps more notably, he is the son of Cooper and the nephew of Peyton and Eli. As he enters his junior year, his recruitment has begun to heat up.

The New Orleans native recently announced some notable planned visits, however, his options are still wide open. He can go literally anywhere in the country, but he plans to see Clemson, SMU, Texas, Alabama and Georgia this summer.

With that being said, his father has been very adamant on keeping his decision private. In addition, he doesn’t want to pull Arch away from his team to see all of the schools on his list.

“You still want to workout with your teammates and not be gone every day,” Cooper said to 247Sports. “Arch has been talking to Stanford, he’s especially interested in doing a Stanford, USC swing. And also a Notre Dame, Ohio State swing. It might be hard to get it all done in June but he’s been enjoying talking to those guys as well.”

Cooper also mentioned that Virginia (where his older sister will attend school), North Carolina, LSU and Ole Miss are on his radar. With that being said, to write out Arch’s full list of offers will require a book. Nobody but he, his family and the schools he is talking to have any idea where he is headed.

The most recent “update.”

Take ESPN’s Adam Rittenberg, for example. He recently wrote an a recruiting roundup that included the young Manning.

“From a recruiting standpoint, schools mentioned most early on are Alabama, Texas and Georgia, with the sleeper being Ole Miss,” he wrote.

So, essentially, Rittenberg is equally as in the dark as the rest of us. He listed three of the most sought-after, high-profile schools in the country for the teams to watch for the nation’s most sought-after, high-profile recruit. And then, just for sake of presenting an outlier, he listed the school for which the Manning family has the most ties.

Now, it could very well be true that Arch is considering those four schools in particular. However, to say that with a straight face, as if it’s a revelation, is preposterous. It could have gone unsaid.

It just goes to show how little we know about Manning’s recruitment. Cooper has made it very clear that this will be Arch’s decision, and that it will be kept internal— until his commitment becomes official.

And Arch still has two years of high school ball remaining, so the decision is not imminent. It’s not uncommon for top prospects to announce commitments during their junior year. But COVID-19 kept recruits from visiting campuses all of last year. There is no rush to sign for the Manning family, and there is so much time left to decide.

Don’t take people like Rittenberg for nothing, but come on, that’s the update he gave?