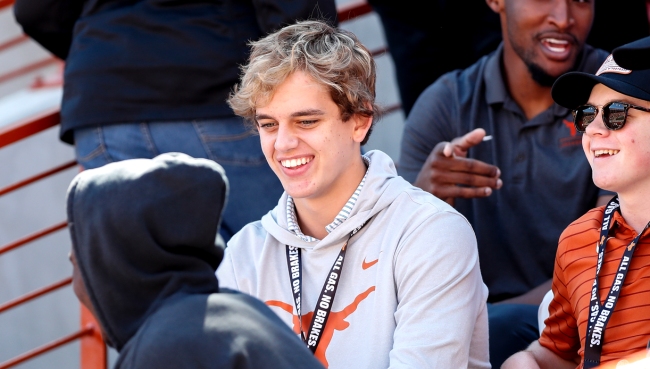 While the speculation around Arch Manning’s recruitment continues to grow each and every day, the 2023 QB has kept his plans under wraps for the most part. That’s all set to change in the month of June, however.

Manning has not put out his own list of top schools, but a new report outlining three official visits he has lined up for next month paints a clear picture.

According to 247 Sports’ Mike Roach, Alabama, Georgia, and Texas are “the locks to get Manning on campus.”

“Texas, Alabama, Georgia — the three schools he mentioned he for sure wants to take visits to,” Roach explained.

“Those schools have kind of been the ones that have been in front of the pack since kind of this entire recruitment started,” Roach later added. “So, not surprising to see that be the trio that he’s decided on for now.”

As Roach points out, those three schools being mentioned are no surprise to anyone that’s been paying attention over the last handful of months.

Alabama being thrown into the mix here is interesting given a recent report suggesting its chances of landing Manning were fading.

No Ole Miss Or Tennessee For Arch Manning?

Plenty can change between now and whenever Manning officially commits to a school – and more NIL money will funnel in – but as of May 2022, the Longhorns, Bulldogs, and Crimson Tide seem to be the favorites.

Plenty of college football analysts and fans believed Manning could look to go to Ole Miss, which is where his grandfather, father, and uncle Eli played. Others have suggested Tennessee, where his uncle Peyton played, but those two schools don’t seem to be in the running at this point.