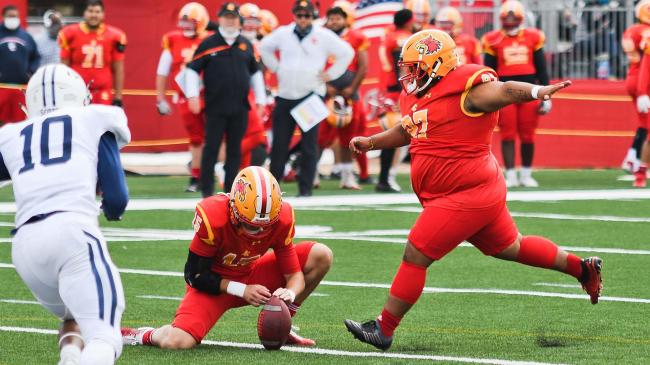 Nester “Manny” Higuera is your favorite kicker that you didn’t know about. The redshirt sophomore is in his third year at Arizona Christian and made the biggest kick of his life on Saturday. Arizona Christian is a small, private, christian university with 705 undergraduate enrollees, located in Phoenix, Arizona. Higuera must be a legend amongst the student body. He stands 5-foot-5, 285 pounds and goes by either “La Bota,” meaning “The Boot,” “El Pie,” meaning “The Foot,” or “The Chancla,” which translates to a flip flop/sandal/slipper and is often used to give spankings— which Higuera does to a football. Just look at this drip king.

The football team competes at the NAIA level in the Sooner Athletic Conference, alongside Texas Wesleyan, Wayland Baptist, Oklahoma Panhandle State, Texas College, Langston University, Lyon College, and Southwestern Assemblies of God University. COVID-19 delayed the start of the 2020 fall season to October, so the season continued through the new year and Arizona Christian went 7-1 in its first eight games. The Firestorm faced SAGU on Saturday and a win would secure a conference championship at 8-1. It came down to the final possession.

After allowing a game-tying touchdown with under a minute left to play, Arizona Christian marched down the field to set up a field goal to win. On came Higuera to attempt the 46-yard kick. He lined up with a chance to win the conference at the buzzer and nailed it. Ice in his veins.

RING SZN!!! 💍 could not be more proud of my dudes! @mhiguera16 got ice in his veins! @RileyTucker8 best holder/safety in the country! Love my dudes! @ACUFootball1 pic.twitter.com/TP5esUhCcZ

Arizona Christian will head to Plainview, TX, to close out the regular season against Wayland Baptist on April 10 and you know we will be rooting for the man who wears a Bass Pro Shop hat on the sideline. Watching him kick is a treat.