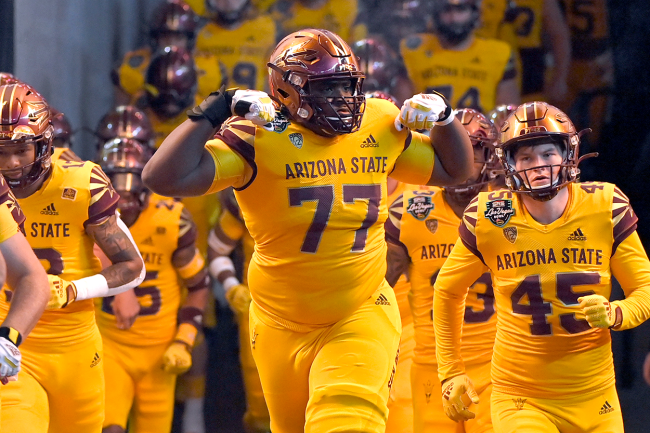 Name, Image and Likeness has changed the landscape of college football. Where finances were handled illegally under-the-table in the past, players can be compensated above ground, legally.

While there are a lot of kinks to be worked out, particularly with the transfer portal, NIL is good. Athletes who are producing a product on the field are allowed to make money from their personal brand off of the field.

However, because of the market inflation and the fact that numbers are being made public, there is a lot of concern. In particular, coaches and figureheads are concerned about what has become something of free agency.

Pay-for-play remains a direct violation of NCAA by-laws, there are legal workarounds that allow the boosters to essentially bankroll a roster. Take what is reportedly happening with Jordan Addison for example.

As a result, people involved with the sport are speaking out. Coaches, players, staffers and administrators alike.

According to a new report from Bruce Feldman of The Athletic, a lot of discussion was had between Pac-12 coaches and administrators on Tuesday morning.

In the report, Feldman detailed some of the things that were said by those in the room. Colorado athletic director Rick George had a very big suggestion.

“The conference would search coaches’ phone records to investigate whether there were inducements to players being discussed with the threat of the schools and the coaches being fined and punished. If Pac-12 leadership finds out a coach has a burner phone, he’s already guilty.”

Another coach told The Athletic that Pac-12 commissioner George Kilavkoff spoke about the potential violations that have been created with deep-pocketed NIL collectives. He noted the body language of other coaches and athletic directors in the room.

“You can’t provide inducements — that’s pay for play. The (NCAA’s) booster rule is that once you’re defined as a booster, you’re a booster for the rest of your life, and if you are a booster, you’re not allowed to give inducements. That’s 100 percent illegal. That’s not a gray area. Boosters aren’t supposed to be having contact with players. That rule hasn’t changed. (George) also went off about how if you have a tiered (NIL) system, that’s pay for play, and I looked around the room and a few people were squirming.”

One person’s comments in particular, from Arizona State athletic director Ray Anderson, stood out above the rest.

As things currently stand, Arizona State football is under NCAA investigation over alleged recruiting violations. Although the investigation is not closed, quite a few coaches on the staff have been fired or resigned. Additional details also implicate head coach Herm Edwards.

Despite the fact that his program is currently in deep trouble for alleged violations of NCAA rules, Anderson reportedly spoke passionatly against rule-breakers at the Pac-12 meeting on Tuesday. It was rather ironic.

“Ray going on his soap box like that, was really something to see,” one source told The Athletic.

“It was so bizarre,” said another coach. “I’m thinking, oh my God, is he really going there?’”

Perhaps Anderson should have just stayed quiet. He is currently involved with a scandal of his own.

And yet, he was the one chastising other programs for cheating. When you point a finger at others, four fingers point back at you.