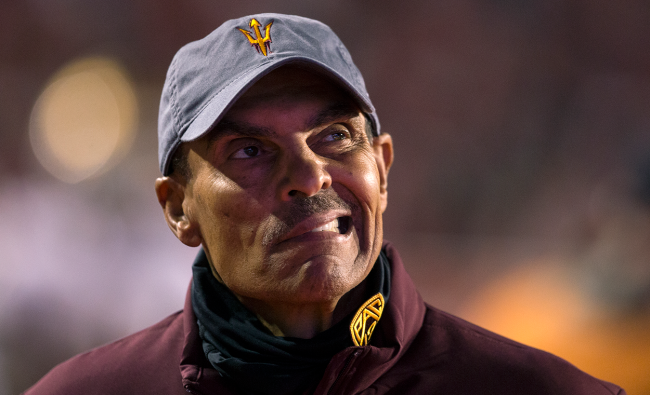 When Arizona State football opens its spring practice next week, it will be without a clear starting quarterback. Four-star Alabama transfer Paul Tyson will be the frontrunner for the job, but the competition is wide open.

That is a completely situation than just a few weeks ago, let alone a few months ago.

On February 17, presumptive starter Jayden Daniels announced that he entered the transfer portal and has since committed to LSU. Prior to his transfer portal entry, he was believed to be returning to Tempe for his final year of eligibility.

In fact, the Arizona State coaching staff was so confident in Daniels coming back for 2022 that it chose not to pursue other options. Spencer Rattler, who transferred out of Oklahoma after the regular season, was reportedly interested in the Sun Devils — at least to some extent — and the interest was mutual.

A new report shares just how close that head coach Herm Edwards and his staff were to landing Rattler.

According to Chris Karpman of 247 Sports, it was very much on the table. Rattler even considered Arizona State to be his preferred destination.

However, once Daniels spoke with the Sun Devils staff, they were confident in moving forward with him as the starter. In turn, they passed on Rattler.

The circumstances under which the conversation was had were extremely uncomfortable.

“I’ve spent a lot of time talking to all the people that would kind of know how the timeline unfolded,” Karpman said. “Essentially what happened was ASU’s season ended with the Territorial Cup against Arizona. Two days later, Spencer Rattler officially entered the transfer portal. ASU coaches were concerned that Jayden Daniels would either transfer or enter the NFL Draft. They were watching film of Spencer Rattler, including Herm Edwards and Antonio Pierce, when Jayden Daniels actually walked in on them doing so and that conversation took place about whether Daniels would come back.”

From there, Daniels essentially said that he was not going to enter the draft and planned to return. Meanwhile, according to Karpman, Rattler was trying to gauge Daniels’ situation, even hitting his line directly.

“Rattler had been communicating with multiple members of ASU’s staff and also even with Jayden Daniels directly to try to ascertain whether Daniels would be back,” Karpman said. “He had told people both on ASU’s staff and also close to him that ASU would be his preferred destination, should Daniels decide that he wouldn’t be back.”

In the end, Daniels announced himself that he would be back and Rattler transferred to South Carolina. Now, three months later, neither of them will be on Arizona State’s roster in 2022. Yikes.