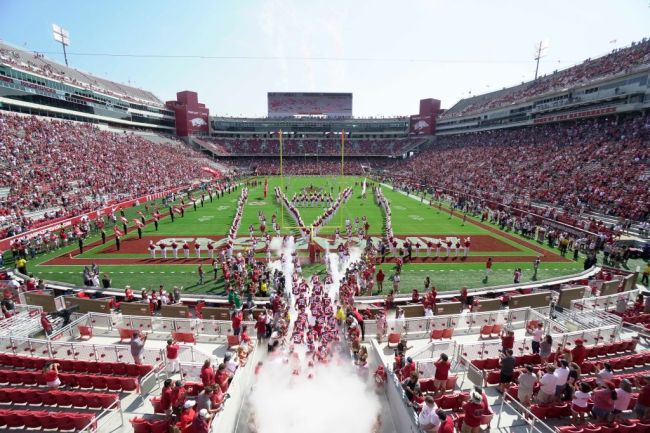 Arkansas athletic director Hunter Yurachek was on the wrong side of a sideline tackle on Saturday but made the most of the situation. The 52-year-old took over in Fayetteville ahead of the spring semester in 2018 and has done a good job thus far.

In his two full years with the program, the Razorbacks won their first-ever SEC and National Championships (in baseball and cross country), and set a spring GPA record with a 3.43 average GPA.

Success on the gridiron hasn’t been quite the same, but under second-year head coach Sam Pittman, the team has high hopes. Perhaps even higher hopes than it should.

Arkansas went 3-7 in 2020 against an All-SEC schedule and took down the likes of Ole Miss, Mississippi State and Tennessee.

Not pulling a Petrino.

As the team prepares for 2021, Yuracheck swung by the team scrimmage on Saturday and took a clear to the face.

Running back Josh Oglesby bounced a run outside and was taken down on the sideline. Falling to the turf, his leg flew up and caught his AD in the face with his cleat.

It left a pretty nasty cut.

Prior to this morning’s @RazorbackFB scrimmage @CoachSamPittman talked about toughness. AD leading by example after taking a cleat to the face on the sidelines. #OneRazorback pic.twitter.com/eWKRSrXnuc

Hours after the incident, Yuracheck posted video of the play from practice and made a hilarious reference to Bobby Petrino’s motorcycle accident scandal.

Petrino was fired from his role as head coach at Arkansas in 2012 after the motorcycle crash revealed that he was having an affair with a staffer. Yuracheck made light of the incident on Twitter.

A big thank you to @CoachSamPittman for sharing video from today’s scrimmage to validate I was indeed at the scrimmage and not on a motorcycle. #OneRazorback pic.twitter.com/AN2FF2CeEQ

Arkansas is 40-69 since Petrino’s firing and is on its fourth full-time head coach in the last 10 years. For Yurechek to make the joke is hilarious, but it might strike a nerve amongst his fan base.