UNC’s Armando Bacot Admits To Being Starstruck By March Madness Legend, His Mustache 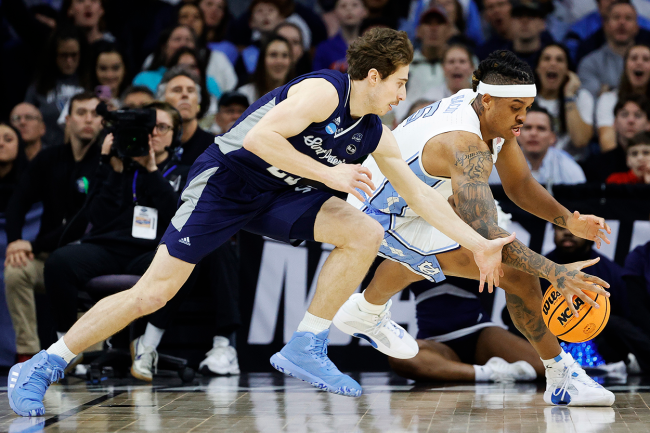 UNC forward Armando Bacot was born one day after Saint Peter’s guard Doug Edert. That didn’t stop the Tar Heels big man from getting star-struck when seeing his opponent on Sunday.

Based on those metrics, Edert would seemingly be more likely to feel ‘starstruck’ upon taking the floor against bigger-name programs and players.

In reality, it was the exact opposite. Bacot was starstruck against the “little guy.”

Throughout March Madness, Edert has exploded onto the scene as a legend. He not only helped the Peacocks on the greatest Cinderella run of all-time, but his mustache will forever live in history.

As a result of his glorious look, Edert signed an NIL deal with Buffalo Wild Wings. The origin story behind his mustache only makes it that much better.

Edert was the talk of the Tournament and leading into Sunday’s Elite Eight game against UNC, he and Saint Peter’s had a chance to become the first 15-seed to make the Final Four. Unfortunately, that did not happen and the Tar Heels absolutely dominated the Peacocks from start to finish.

Some people might say that part of the loss had to do with reality sinking in and the stage being too big for such a small school. Whether that was the case or not, Bacot said after the game that the bright lights and ‘starstruck’ mentality went both ways.

He couldn’t believe that he was playing against Edert.

Actually funny you said that because that’s the first thing I though when I saw him 😂😂😂 https://t.co/tiTY8PvMku

Although Edert and Saint Peter’s run has come to a close, he will never be forgotten. Bacot had a hilarious take and we will surely see plenty of the Peacocks in ‘One Shining Moment.’