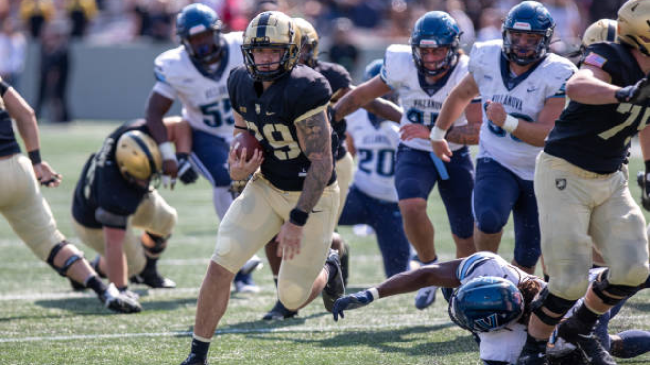 There are no teams in the world of football that stick to the run like the military academies. Army, Navy, and Air Force are well known for their relentless rushing attacks and Army and Air Force have even managed to crack the top 25 in recent seasons based on the strength of their rushing attacks.

Today, Army took their commitment to the running game to a whole new level. The Black Knights welcomed Villanova to West Point today for their yearly matchup against an FCS school. It’s a matchup they were expected to win, but they did so in dominant fashion.

It also happens that they did it without a single passing yard in the game.

Army beats Villanova by 39 without gaining a single passing yard

Army only even attempted on pass in the game, which came on a 3rd down deep in their own territory in the 2nd quarter. While the passing game was non-existent, their rushing attack was just about unstoppable against Nova.

Army had 12 different players run the ball in this matchup against Villanova. 7 of them topped 20 yards in the game and 4 of them went over 50 rushing yards. 4 of them also scored touchdowns.

In total, Army racked up an astounding 472 yards on the ground, led by 158 yards and a TD from Tyson Riley. That 472 yards came on 55 carries, which gave them an average of 8.8 yards per carry, almost a first down every time they handed it off. The 472 yards rushing was also more than they had managed in their first 2 games combined.

After putting together such a dominant win without any help from the passing game, football fans can expect to continue to see plenty of runs from the Army offense throughout the rest of this season.