Arrest Video Shows Zac Stacy Telling Cops His Ex-Girlfriend ‘Staged’ The Attack, It Was All Her Fault 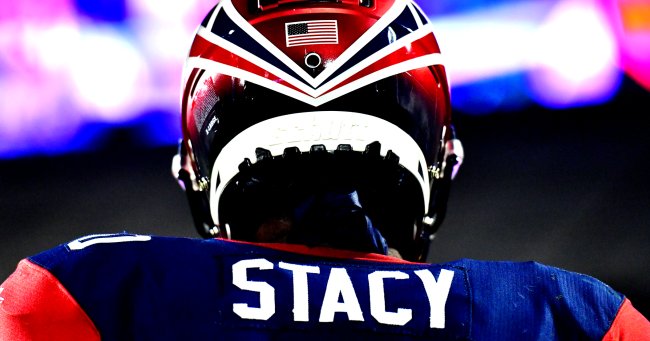 Former NFL running back Zac Stacy is currently free on bond after video surfaced of him in November showing him savagely beating his ex-girlfriend Kristin Evans in front of their 5-month-old son.

Stacy, who fled the state of Florida after the video surfaced, was arrested at the Orlando International Airport as he exited an inbound flight from Nashville.

His lawyer claimed in court, according to Fox 35 News, that Stacy had returned to Florida from Tennessee after learning that police had issued a warrant for his arrest and was going to turn himself in to authorities.

Related: Zac Stacy Domestic Violence Victim Says Her Life Is In ‘Imminent Danger’ After Stacy Allowed To Be Released On $10,150 Bond

Now, TMZ Sports has obtained video of Zac Stacy’s arrest at the airport where the former Rams, Jets, Saskatchewan Roughriders, and Memphis Express player claimed his ex-girlfriend “staged” the attack and that he “wasn’t running.”

“I just got a rehab for anxiety, depression, like eight months ago,” Stacy told the officers. “I dropped everything to come down here and support the mother of my child and her last trimester and the baby and I let her know that I wasn’t trying to be with her or nothing like that and she just… this is just a case of just bitterness, man. That’s why she did this. The whole assault thing, she staged it. She set me up.

“I just found out a week ago that she was having an affair with my attorney. You know what I’m saying? With my financial advisor I meant… so he was one of my teammates in college.

“Like I said, I dropped my job up in Nashville early this year, went to rehab in March, got out in April, came straight down here, just trying to be here, support her. Unfortunately, I came down here and played house with her. She thought something else was going to be on and she tried to make everything else about everything except for me supporting her baby.

“So, yeah, I filed a petition on her to just get my rights on paper and she’s just been, I don’t know if it’s post-partum, but she’s been kind of unstable ever since.”

Stacy then claimed, “The whole thing was staged. All she’s trying to do is get money out of me. She got a reaction out of me.”

He continued, “She knew I was down, she knew I was going through anxiety and depression. She knew I was trying to close this gap that’s between me and my son and she’s just upset that she got caught and she’s upset I’m not taking care of him like she expected. And now she took it this far.”

He also told police, “This is just a case of just girl is just bitter that I don’t want to be with her and she’s just trying to destroy my whole reputation ’cause of this s–t.

“It was f—ed up that I reacted the way I did. I don’t know what man… how any man could have handled that situation.”

So, according to Stacy, him admittedly hitting Evans repeatedly, throwing her into the television, and choke slamming her onto the baby’s bouncy chair was all her fault because she was possibly going through post-partum?

Good luck with that defense when he goes to trial.