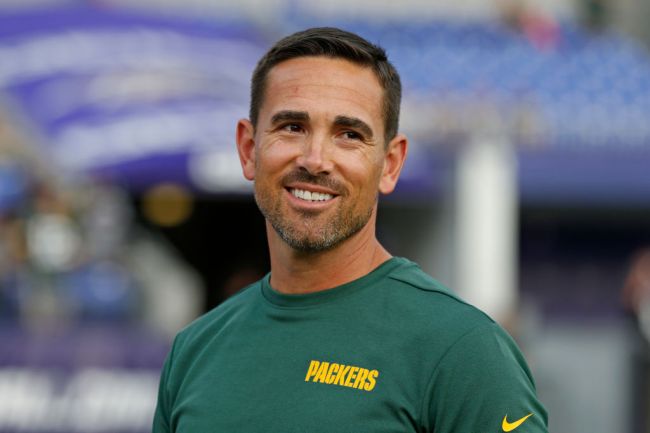 The two coaches have ties to one another as they were both members of the Tennessee Titans coaching staff during the 2018 season. They seem to have a good relationship with one another as Smith’s comments about LaFleur were obviously in a joking manner, but the Packers head coach got the last laugh.

Smith decided to take a dig at LaFleur’s appearance joking that he spends an hour looking in the mirror before games.

Arthur Smith: “I don’t spend an hour looking in the mirror before games like Matt Lafleur does.”

LaFleur may spend an hour getting ready before kickoff, but as he pointed out, at least his hair looks better than Smith’s. Plus, LaFleur reminded everyone that he looks as good as he does despite being older than Smith. LaFleur is 41, while Smith is still only 39 and has plenty of grey hair.

LaFleur responds to Arthur Smith saying he looks in the mirror for an hour pregame: “I might have been looking in the mirror getting my clothes right while he was trying to get his hair right with that Just For Men.”

“You guys know he’s younger than me, right?” pic.twitter.com/hgqd64udTl

It’s some G-rated banter between two head coaches, not quite on the level of Lions’ head coach Dan Campbell, but we should take what we can get when it comes to NFL coaches going back-and-forth at one another.

Unfortunately, Atlanta and Green Bay don’t meet up during the regular season this year. Maybe we’ll see LaFleur and Smith go head-to-head in the playoffs, however.