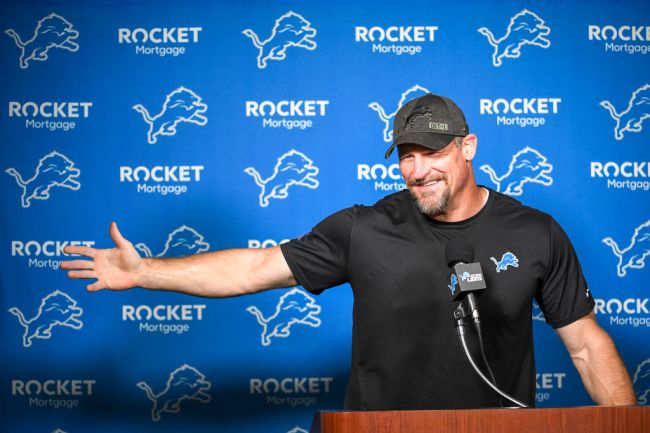 Detroit Lions head coach Dan Campbell is the gift that just keeps giving. The 45-year-old has only been in Detroit since January, but he’s quickly become a favorite within the media given his pure authenticity.

In his introductory press conference, Campbell said the Lions were going to “bite a knee cap off.” Then, just last week, he blew everyone’s mind by saying that he starts his day by drinking 40 ounces of coffee and four espresso shots. Now, he’s talking about turds or a lack thereof.

Campbell tipped his cap to the Lions’ former head coach Matt Patricia and the front office for building a roster with hard-working players. He then went on to say that there were “no turds” on Detroit’s roster.

“I think we’re fortunate because I do believe we have some talented players on this team that have grit, and that’s a good thing, you know?” Campbell said, via Kyle Meinke of Mlive.com. “I said this when I walked in — there’s a number of guys that were here, and I think [Matt] Patricia and [Bob] Quinn did a great job of, there’s no turds here.

The Lions aren’t expected to be any good this season, and if Campbell keeps delivering these types of quotes week after week, the losing they’re going to do on the field isn’t going to look quite as bad.

You have to appreciate a head coach, especially a first-year head coach entering a rebuild, speaking his mind like this, and not putting a filter on what he has to say.