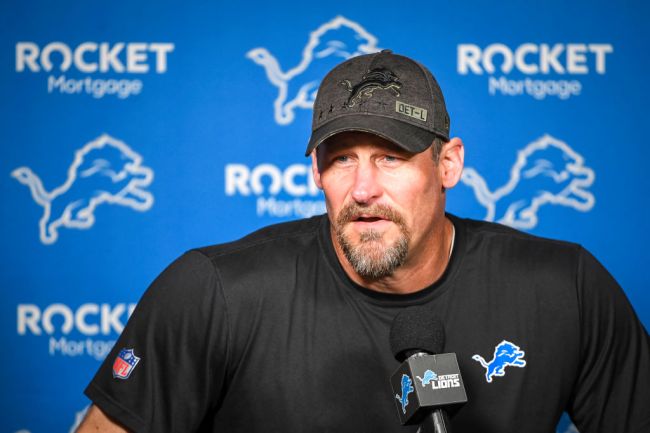 A single bead of sweat runs down the porcelain face of Dan Campbell’s office toilet as the stall door swings open each morning and the Lions head coach begins anxiously tap dancing in front of it like a runner at a red light.

No toilet, no matter it’s past sins, should be subjected to the daily abuse Dan Campbell bestows upon it every morning after purging a Starbucks coffee intake fit for a resurrection.

What is your morning coffee order? Is it more than Dan’s? #Lions #NFL
🎥: @KoryEWoods pic.twitter.com/MCIB33kfSv

40 ounces of coffee and four espresso shots amounts to 1,100 mg of caffeine, or the equivalent of drinking 10 Red Bulls every single morning. The FDA daily limit suggestion is 400 mg per day.

I'm ready to call it: With all due respect to Vrabel, Flores, Saleh….Dan Campbell wins the NFL coach battle royale. This man cannot be stopped. https://t.co/nBgiEY84HN

[drinks 80 ounces of coffee and four shots of espresso]

He actually died 3 weeks ago, but his heart is still pumping solely on caffeine

Y’all must of forgot pic.twitter.com/lXzp0msOhT

His toilet 15 mins after getting to the complex pic.twitter.com/NajnCxFU6s

Dan Campbell when he walks into the office every day pic.twitter.com/b4FOA4KPWa

Anyone have any blow they can send Dan’s way? Not sure it will help much with the toilet abuse, but will alleviate the teeth stain.