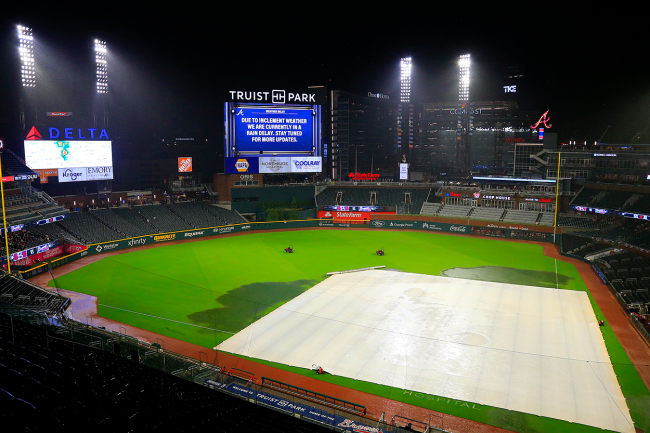 The Fourth of July and baseball goes hand-in-hand. In fact, it’s a shock that Major League Baseball does not own the holiday more than it does.

With the NBA Finals and Stanley Cup over and football a few weeks away, it’s baseball’s time to shine. Or, in the case of Monday’s game between the Atlanta Braves and Saint Louis Cardinals, it was the security guards’ time to shine while the sun did not.

As the two NL teams tried to take the field on Independence Day, things quickly took a turn as heavy rains moved in and the tarp came on around 9:00pm ET.

The tarp is on the field and we are currently in a rain delay. We will pass along updates as soon as they are available.

Unfortunately it’s still raining and we remain in a delay. We will pass along any updates as soon as they are available. pic.twitter.com/H0JmfaFKsA

Until about 11:00pm ET when the grounds crew finally came onto the field and rolled away the tarp.

After getting back to the action, things finally wrapped up around 1:00am ET and the Braves won the game 6-3.

However, that was not the biggest moment of the evening. It was the (loose definition) streakers during the Braves/Cardinals rain delay.

Just before 10:00pm ET, two fans decided to create some entertainment of their own as they waited for the rain to pass through. With the tarp still on the field, they hopped the fence and took off across the outfield.

Video of the two rogue fans, though short, is hilarious.

One fan, wearing a white shirt, takes a direct line in right field and tries to outrun one of the rain jacket-wearing security guards. It does not go well and the fan gets rocked.

Meanwhile, in the outfield just beyond the second base path, the other fan does a quick dance and shuffle before getting chased toward centerfield. Eventually, another security guard without a rain jacket comes flying in across the tarp and lays out the second fan as well.

The entire thing is electric, but it is the commentary from the press box that really makes it special, take a look:

Finally some action on the field… pic.twitter.com/5dPWsI3r3D

The two fans, of course, were led off of the field and reportedly have been banned for life.

It was them getting lead off the field for me lmaoooo #hometownheroes pic.twitter.com/00nLchws8f

Surely, as they got escorted out, there were cries of “I’M SORRY, I THOUGHT THIS WAS AMERICA!” but no such claim has been confirmed. It’s just the right thing to say on the 4th of July.