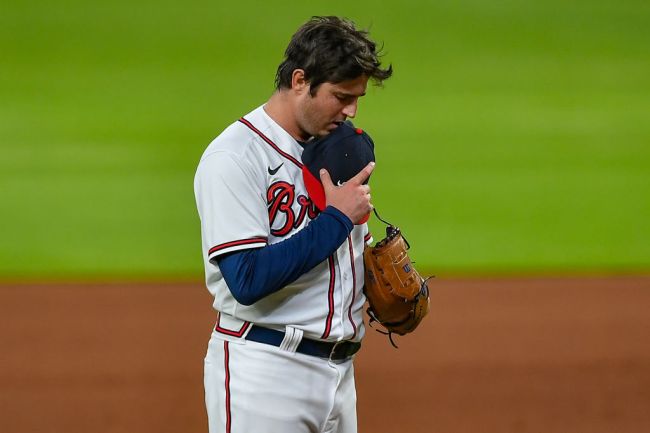 It is probably not a good sign for a hitter when the opposing pitcher is singing along to his walk-up song. That was the case on Sunday as Braves reliever Luke Jackson toed the rubber against Nationals outfielder Andrew Stevenson.

Stevenson, who grew up in Lafayette, Louisiana, went to LSU and loves country music. When it is his turn to step into the box for an at-bat, Jason Aldean’s “Amarillo Sky” plays through the loud speakers.

Jackson, who grew up in Florida, also loves country music. It appears as though he also loves Stevenson’s song choice.

During the bottom of the eighth inning, with Atlanta holding a one-run lead with two outs, it was time for Stevenson to face Jackson. Aldean began to play in the stadium and Jackson very emphatically started to sing along as a vein popped from his neck.

The 29-year-old was absolutely dialed and rocking out to the song from 2005.

“He just takes the tractor another round. And pulls the plow across the ground. And sends up another prayer. He says, ‘Lord, I never complain, I never ask why, but please don’t let my dream to run dry.'”

It was not a good sign for Stevenson. He stepped up to the plate and took the first pitch for a strike. And then he swung at two straight sliders to end the inning.

This likely wasn’t the first time that a player in the field sung along to a walk-up tune. However, if you ever see a 6-foot-2, 210-pound pitcher with a 2.20 ERA singing along as you walk up to the dish, you might as well accept your fate.