The Atlanta Falcons Will Sell Craft Beer For $5 At Home Games This Season, The Cheapest In The Four Major U.S. Sports 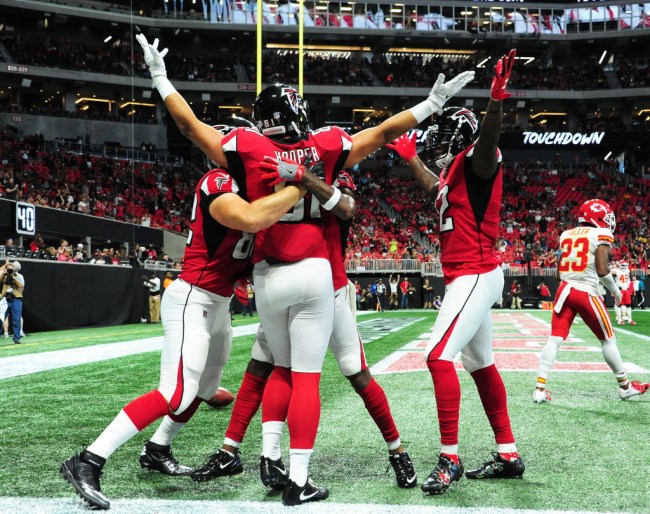 It’s no secret that a fan’s game-day experience will cost him roughly the price of his kidney and first born. The average price for a ticket in the 2016 season was about $86,  beer about $7.40, and a hot dog is about $5.29. The Raiders are the biggest criminals of them all, as one one 12 ounce beer at a Raider’s home game will cost you an NFL-leading $10.75. The hot dog for $6.75 is also the most expensive dog in the league, according to Food Beast.

But the buck stops at Mercedes-Benz Stadium, home to the Atlanta Falcons.

The  Falcons will pioneer the idea that you don’t need to remortgage your home to attend a sporting event. According to ESPN, the Falcons will sell the $5 craft beers at their regular-season games, beginning with their home opener against the Panthers on September 16th.

They will extend this deal to home playoff games. The brand of craft beer has yet to be named but the Falcons say that it’s produced in small batches locally and costs $5 for 12 ounces and $7 for 20 ounces. That price tag marks the lowest price for a craft beer in the four major North American sports.

The beer, a pale ale, was the winner of a taste test among Falcons and Atlanta United season-ticket holders. The $5 price tag matches what the team charged for a regular domestic beer on draft last year. A premium 20-ounce beer previously cost $9.

When compared to beer prices for other teams, the new price is roughly half of what others charge for craft beer on draft.

A large 25-ounce cup of craft beer will cost a fan at Nationals Park $16. The San Francisco Giants charge $19.25 for 22 ounces of craft beer. At 88 cents an ounce, it’s the highest in all of sports.

But beer isn’t the only product the Falcons are slashing prices on–they are cutting prices by 12% on six different food items.

Falcons, Atlanta United challenging themselves to get even cheaper this year for fans. Dropped prices on these items by $1 for this season. pic.twitter.com/H5XLfBsDAj

Good on you, Atlanta!

P.S. I went to the College Football National Championship game at Mercedes-Benz stadium this past year and was blown away with how awesome the stadium was…

Here is your truly, 41 beers deep capturing Alabama’s game-winning touchdown pass, recording on phone that appears to be just as drunk. Holy shit, what a night.