Aubrey Huff Mocks LeBron James For Carrying A ‘Purse’, Gets Instantly Reminded About The Time He Said He Wore His Wife’s Underwear 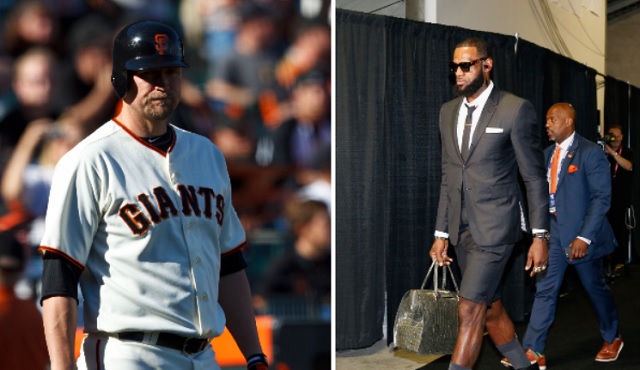 On Sunday night, Huff mocked the NBA star and said he wasn’t manly for “carrying a purse” with his pregame outfits.

Young men this is not how a man is supposed to dress. Carrying a purse is not cool. I suppose dressing like this makes it easier to kneel. #emasculated pic.twitter.com/JK2ifJsWgZ

Things didn’t end well for Huff as he was immediately reminded about that time he wore his wife’s underwear during the 2010 playoffs.

Said the guy who literally wore his wife’s underwear during the MLB playoffs. https://t.co/aWUszOuGX6 pic.twitter.com/9fxUPUVMeP

While those are interesting, the superstition that is the most tantalizing of 2010 has to go to Aubrey Huff. He admitted back in September that he started wearing his wife’s red thong underwear in hopes it would get him out of a hitting slump.

With 30 games left in the season, he declared that the power of the thong would be good enough to get the team 20 wins. And darned if they didn’t get exactly 20 wins, which was just enough to get them to the post-season.

The piece of lingerie has been dubbed the Rally Thong and is now part of the Giants anthem.

Of course, others piled on Huff for his hot take on LeBron.

Didn’t you wear a red thong under your uniform? https://t.co/Op0kudzyiD

yes, LeBron James, who is 6'9, 250 lbs, maintains a greek statue-like body at the age of 35, and is arguably the greatest basketball player of all time and one of the best athletes ever, should try to be as masculine as [checks notes] Aubrey Huff https://t.co/qKSEnIOHw1

Your inability to understand Thom Browne’s radical tailoring is a sign of your underdeveloped prefrontal cortex, but then again you posted this. https://t.co/8F48ly0ex7 pic.twitter.com/syBbWPXH98