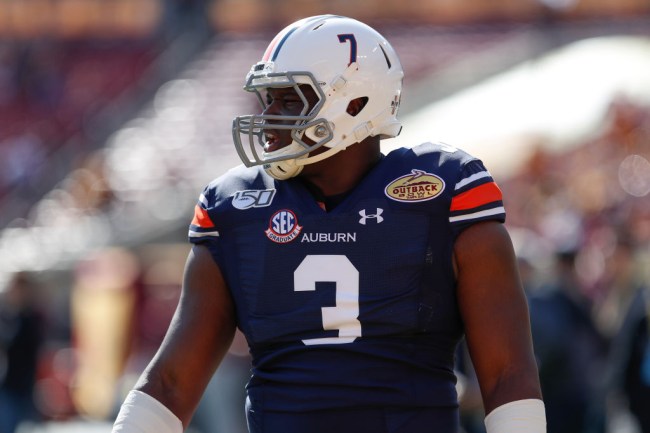 Players at the NFL Combine are asked plenty of questions about a whole range of topics and most of the time the answers are pretty standard, but every year we get an eye-opening statement or two and this years comes from Marlon Davidson.

On Thursday, the Auburn standout was asked the simple question of what he loves most about the game of football and he went in a direction with his answer that nobody was expecting.

“I can literally go out there and hit a man consistently, and pound him, and the police won’t come, that’s the most enjoyable moment about football,” Davidson said. “They won’t say anything about it in the press. I won’t get any headlines, handcuffs or mugshots.”

#Auburn DL Marlon Davidson on what he loves most about the game:

“What I love most about the game is that I can literally go out there and hit a man consistently, and pound him, and the police won’t come.” pic.twitter.com/EgV9rtIcsL

Nope, he doesn’t love the team aspect of the game, being with his guys and chasing one common goal, his favorite part about the game is the fact that he can beat the shit out other people and not get arrested for doing so.

That’s certainly one way to look at the game of football and express that you love the physicality involved.

It’s pretty clear that Davidson wasn’t coached up by any media relations folks ahead of the combine, that’s for sure.

It’s actually refreshing to hear such an honest answer from a player, but then again, those are some choice words.

Davidson wracked up 48 tackles and 6.5 sacks last year at Auburn and is expected to be selected within the first three rounds of the NFL Draft.