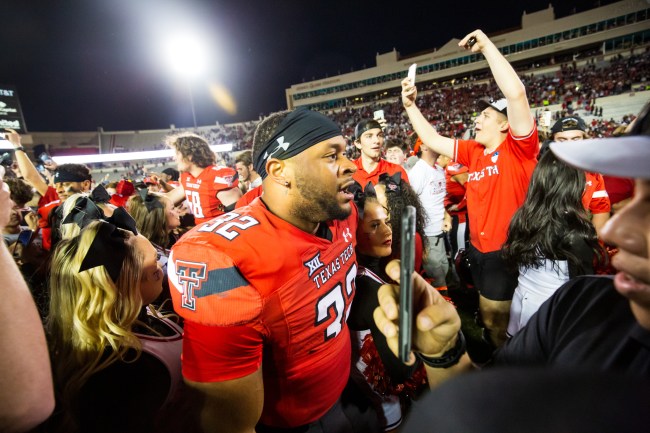 The Big 12 made an announcement earlier this week that they would be suspending Texas Tech’s play-by-play announcer, Brian Jensen, and their color analyst, John Harris for one game each.The suspensions was the result of repeated complaints about Big-12 officiating during Texas Tech’s 41-38 victory over Iowa State.

Last night, Timothy Burke was kind enough to provide the audio of the comments that got the two announcers suspended.

It's not audible in my recording (likely noise-gated) but he does pretty clearly say "bullshit" about a replay review just a minute or two before the above recordings start pic.twitter.com/Q4vWjc2BY9

In the more than 6 consecutive minutes of complaints, the commentators can be heard accusing the Big-12 of wanting Iowa State to win the game, expressing shock at the refs actually making calls against Iowa State, and even wondering if one of the refs is concussed.

In the last clip, the announcer is caught swearing after the refs rule that a Texas Tech interception at the goal line was actually an incomplete pass.

During the clips, the announcers also managed to call out the Big-12’s commissioner, Bob Bowlsby, by name because of the perceived bias toward Iowa State. They also named every single member of the officiating crew for their audience.

Normally, the announcers would be sympathetic figures in these scenarios, especially if the officiating was actually as bad as they were claiming. In this case, those last two comments make it tough to take the announcers’ side on this one.

Now, these two will miss Saturday’s big matchup against #9 Oklahoma State before returning for the rivalry weekend clash against #11 Baylor in the last game of the regular season.

I’d guess they’ll have less to say about the Big 12 in that one.