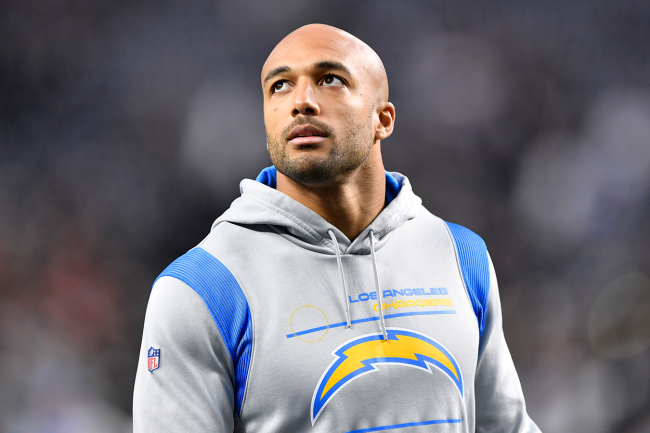 As Fan Controlled Football began its second season on Saturday night, quite a few big names were in attendance. Druski, Steve Aoki, Johnny Manziel and Austin Ekeler were among those in the crowd, which makes sense considering that they each own a piece of either the league itself or one of the teams.

With quite a few people on the sideline, 48-year-old Terrell Owens was on the field. The NFL Hall of Fame wide receiver wants to prove that he’s still “got it” and scored his first touchdown in more than a decade during his debut. It was epic— Owens called his shot and then went up and “Mossed” an unlucky cornerback who was forced to cover him.

After his game finished up, Owens joined the broadcast for an interview alongside Ekeler. During his time in the NFL, Owens was not only one of the best to ever do it, but he was considered part of the ‘diva’ wide receiver era, alongside guys like Chad ‘Ochocinco’ Johnson.

Going off of that notion, Austin Ekeler was asked about ‘diva’ running backs in the NFL.

He proceeded to give a totally cop out answer.

“I wouldn’t call it a ‘diva,’ but they have their own styles or their own swag,” Ekeler started. “[Their swag] is maybe not necessarily, like, normal, so they could be called a ‘diva,’ right?”

Rather than naming an explosive name, Ekeler gave his former teammate Melvin Gordon as an example. While Gordon makes sense in that framework, it was a totally easy answer for Ekeler. He chose not to throw out a name that he didn’t know wouldn’t cause any conflict. Gordon is a friend of his and was the easy route in terms of the answer to the diva question.

“He had his own swagger, he had his own drip,” Ekeler said. “You know he had the braids and the dreads, he had it going on man! I wouldn’t say necessarily a diva, but he had his own personality and swag.”

At the end of the comments, although it gets cut off, Ekeler appears to say that Gordon was “a little bit diva.” Take a listen:

.@AustinEkeler on 'Diva' Running Backs in the NFL pic.twitter.com/oUZuabpTL2

While Ekeler is not wrong, and while probably made the right call not to start any beef, it was a total cop out.