Australia And The Philippines Get Into A Crazy, Massive Brawl In The FIBA World Cup Basketball Qualifier 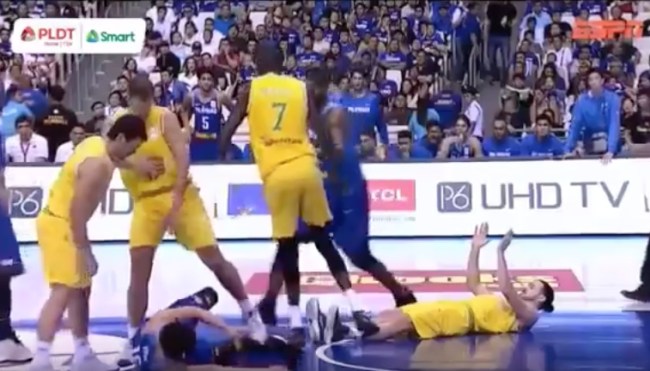 Australia and the Philippines were playing a FIBA World Cup when the two teams broke out into an all out brawl that made the Malice in the Palace look like a game of Patty Cake. Milwaukee Bucks center Thon Maker was the most high-profile player in the fight, but maybe the most uncomfortable with how to throw hands.

The brouhaha was set off by an elbow and devolved into thirteen players getting ejected, four from Australia (Maker included) and nine from the Philippines. The Philippines were forced to play with just three players and after Philippines captain Gabe Norwood fouled out, it left just one player available for the team, ending the game. The Philippines ended up getting waxed, 89-53.

The genesis of the fight:

Check out one of the most entertaining basketball brawls you’ll ever see below.

Disgusting scenes in Phillipines. Worst thing I've ever seen in a sporting event! Look at all those coward punches by the Phillipines players. #FIBAWCAQ pic.twitter.com/9yO1yLWf40

This guy needs to be arrested. https://t.co/JtRr4ziDLT

I lost a lot of respect for Thon Maker.